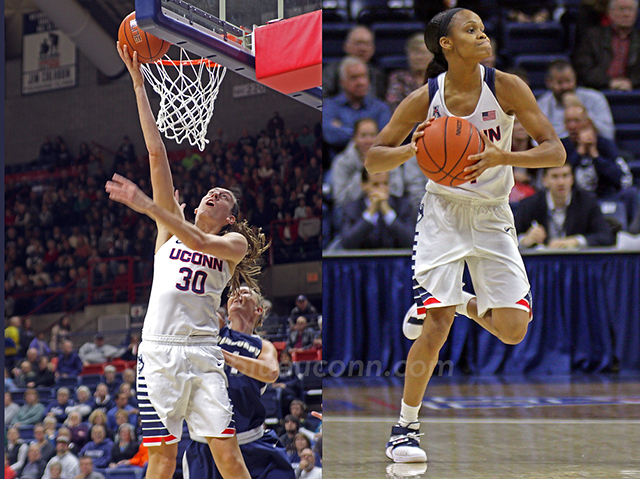 For the third straight year, Breanna Stewart was named an AP Preseason All-American and is joined by her teammate Moriah Jefferson on the five-member team.

STORRS, Conn. – Seniors Breanna Stewart (North Syracuse, N.Y.) and Moriah Jefferson (Glenn Heights, Texas) were selected to the Associated Press Preseason All-America Team, as announced on Tuesday afternoon. It is the third-straight time that a Husky duo has been named to the five-member team.

In October, Stewart was chosen as the American Athletic Conference Preseason Player of the Year and was joined by Jefferson on the All-Conference First Team, as UConn was picked as the unanimous favorite to win the league. Last week, the Huskies were tabbed as the nation’s preseason No. 1 team by the AP before cruising to a 98-18 victory over Vanguard in its 2015-16 exhibition finale on Nov. 8.

Stewart begins her senior campaign after leading the team with 17.6 points, 7.8 rebounds and 3.1 assists per game in UConn’s 2014-15 national championship season. She enhanced nearly every aspect of her game during the Huskies’ nine-game run through the postseason, averaging 18.1 points on 53.3 percent shooting and 10.7 rebounds. For her efforts, Stewart was recognized as the Final Four’s Most Outstanding Player and is the only player in history to receive the honor three times. Standing 10th on the Huskies’ all-time scoring list with 1,960 career points, the North Syracuse native earned national player of the year honors from the Associated Press, WBCA (Wade Trophy), Atlanta Tip-Off Club (Naismith Trophy), USBWA (Ann Meyers Drysdale Award) and L.A. Athletic Club (John R. Wooden Award) last season.

Starting at point in all 39 games during her junior campaign, Jefferson averaged 12.4 points per outing for the Huskies. She ranked fifth in the nation with a 3.1-1 assist-to-turnover ratio while leading the team with 100 steals to become only the second Husky all-time to record back-to-back years with at least 100 steals. The Texas native is entering the 2015-16 season with 258 career thefts, which ranks eighth in UConn history. Jefferson’s precision at the helm of the offense earned her national recognition as she received the Nancy Lieberman Award, which honors the nation’s top point guard.

It marks the third consecutive year that Stewart has been selected for the team, which is rounded out by South Carolina’s Tiffany Mitchell, Baylor’s Nina Davis and Ohio State’s Kelsey Mitchell.

The Huskies will kick-off the regular season on the road against Ohio State on Monday, Nov. 16. Tip-off set for 5:30 p.m. and the game will be broadcast on ESPN2