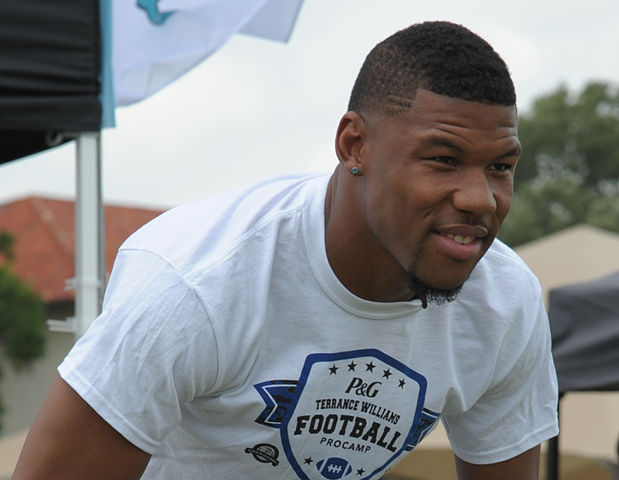 Taking a hot shit on all his fantasy owners….. Photo Credit: Joel Martinez

The type of supposed value transformation heaped upon Terrance Williams following the injury to Dez Bryant presents a rare sell-high opportunity for a player that has done jack shit.

Dez Bryant is one of the best WRs in the NFL. He has a great QB throwing to him, but the bulk of Bryant’s production is based on his immense talent. Terrance Williams simply isn’t Dez. Dez’s retarded cousin? Maybe.

Dumb fantasy owners everywhere are buying into Williams as a potential WR1 because… well, he must automatically gobble up all those WR1 targets going. While it’s true that Dallas’ WR corps is underwhelming overall, Williams does not possess the pure play-making ability to be anything more than a low-end WR2 (or, more likely, a playable but hardly heartwarming WR3). He has size and decent speed to go along with that size, but he doesn’t possess enough after-the-catch elusiveness to be anything more than a volume-based receiver.

Speaking of volume, allow me to drop a hot deuce on the notion that Dez’s targets = Williams’ targets going forward (sorry about all the poop reference, on the can while writing this). First, expect Dallas to run the ball often. With Bryant out, the best bet for them to win games is to lean on their RBs behind the league’s best offensive line. Don’t expect the Cowboys to attempt 45 passes again anytime soon. The throws Tony Romo makes might also be spread around a bit more. Sure Williams is the logical choice to lead the team in targets on a weekly basis, but as a pure outside receiver with limited versatility, the Cowboys will likely get the rest of their receiving corps more involved.

The one thing going for Williams owners is his size. If Romo favors him in the red zone, Williams’ value would see an obvious boost (though keep in mind that Jason Witten has hauled in plenty of Romo’s passes in the end zone… both on and off the field).

Even if Williams scores a few more TDs, the odds are pretty good that his perceived fantasy value is higher right now than it will be at any other point this season. I don’t own Williams in any of my leagues, but I’d try to slyly include him in a package deal to see if you can get a sucker to bite.