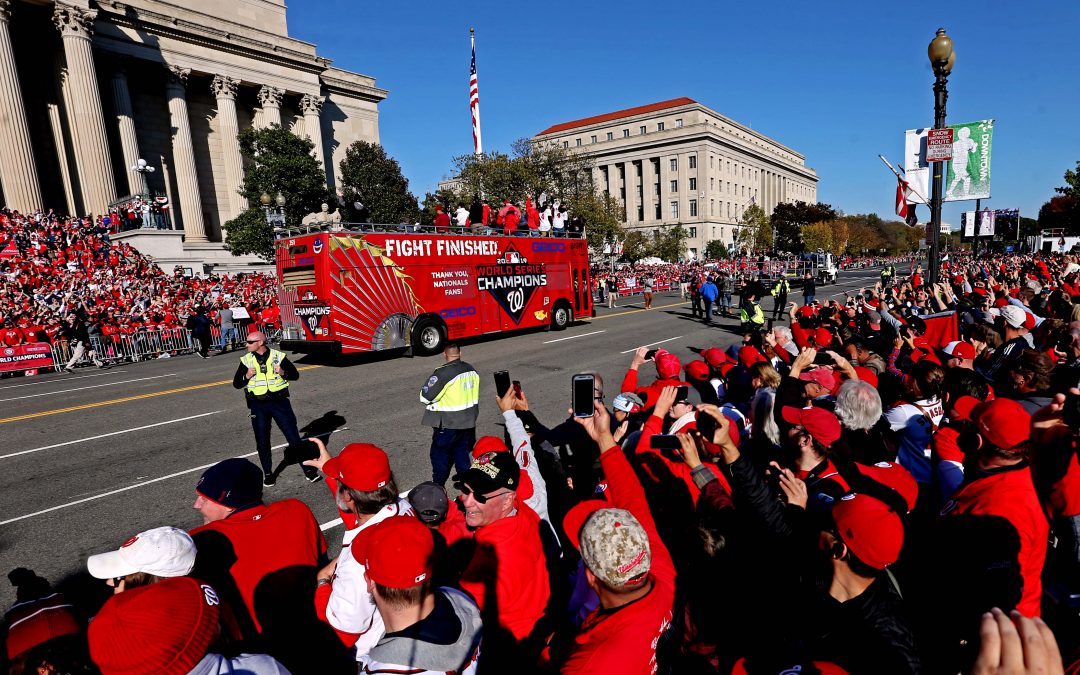 How many times were the Washington Nationals left for dead throughout the 2019 season? Well, let’s count.

Through 50 games, the Nationals were a disastrous 19-31. At that point, they had slightly more than a 20 percent chance to make it to the playoffs. From then on, however, Washington compiled a 74-39 record—which would equate to a 106-win rate over the course of a full year. Although the National League East title was never really in play, the Nats scraped into a wild-card spot. And, as everyone knows, anything can happen once you’re in the playoffs.

In the wild-card game against the Milwaukee Brewers, Washington trailed 3-1 going into the bottom of the eighth inning. The home team’s chance of winning dipped as low as 12.2 percent before a three-run rally in the penultimate frame led to a 4-3 victory.

Against the high-powered Los Angeles Dodgers in the NLDS, the Nationals forced Game 5 back in L.A. only to trail 3-0 going into the sixth inning. They were given a 9.2 percent chance of advancing but laughed in the face of those numbers and ended up triumphing 7-3 in 10 innings.

The NLCS was shockingly straightforward as the Nats humiliated the St. Louis Cardinals in four straight mostly lopsided affairs, but that was only an aberration to the rule that was playoff drama. They proceeded to defy MLB World Series predictions, with just about everyone picking the Houston Astros to win—both before the best-of-seven set began and certainly when they returned to Houston with a 3-2 lead in hand. After taking Game 6 by a 7-2 margin, Washington quickly found its back against the wall in the form of a 2-0 deficit going into the seventh inning. The visitors had a 12.3 percent chance of prevailing, but they acted like they had been there before…because they had. Defying odds was the theme of the Nationals’ playoff run and that is exactly what they did one more time on Wednesday. With three runs in the seventh, one on the eighth, and two in the ninth, they captured their first World Series title with a 6-2 triumph.

Right-hander Stephen Strasburg, who went an amazing 5-0 in the playoffs, earned World Series MVP honors with wins in Game 2 and Game 6. At the plate, Anthony Rendon, Juan Soto, and Howie Kendrick were among a plethora of heroes. Kendrick, 36, was captain clutch in the NLDS with a 10th-inning grand slam in Game 5 and he hit a go-ahead, two-run homer in the top of the seventh in Game 7 at Houston.

In due time the question will be if the Nationals can pay the guys who just carried them to the championship and give it another go in 2020. For now, though, they should enjoy one of the most amazing and improbable playoff runs in recent baseball history.