RESPECT was thusly named for the primary storylines and feuds driving the show: respect for the late, great Dusty Rhodes via the Dusty Classic tag-team tournament, and NXT Women’s Champion Bayley’s battle for respect from Sasha Banks.

The main-event women of NXT further commanded respect from wrestling fans with their brand of grappling, performing in a 30-minute Iron Man Match. As they have every time they’ve wrestled, whether one-on-one or in four-ways, Sasha Banks and Bayley tore down the house.

Two of the best in the entire pro wrestling world.

With the locker room and live audience given them a standing ovation, Triple H presented both Sasha Banks and Bayley with flower bouquets. This show of respect was reminiscent of the scenes common in Japanese main events. For those unfamiliar with puroresu, the Japanese brand of wrestling is treated more like sport than the American style — at least, the American style popularized by WWE under Vince K. McMahon.

In that moment, both Bayley and Sasha Banks teared up. It was genuine, raw emotion.

Another, similar scene unfolded upon conclusion of the Dusty Classic. After Samoa Joe and Finn Balor defeated Rhino and Baron Corbin in each team’s second, excellent match of the show, Dusty Rhodes’ family came to the ring to present the victors with their trophy. 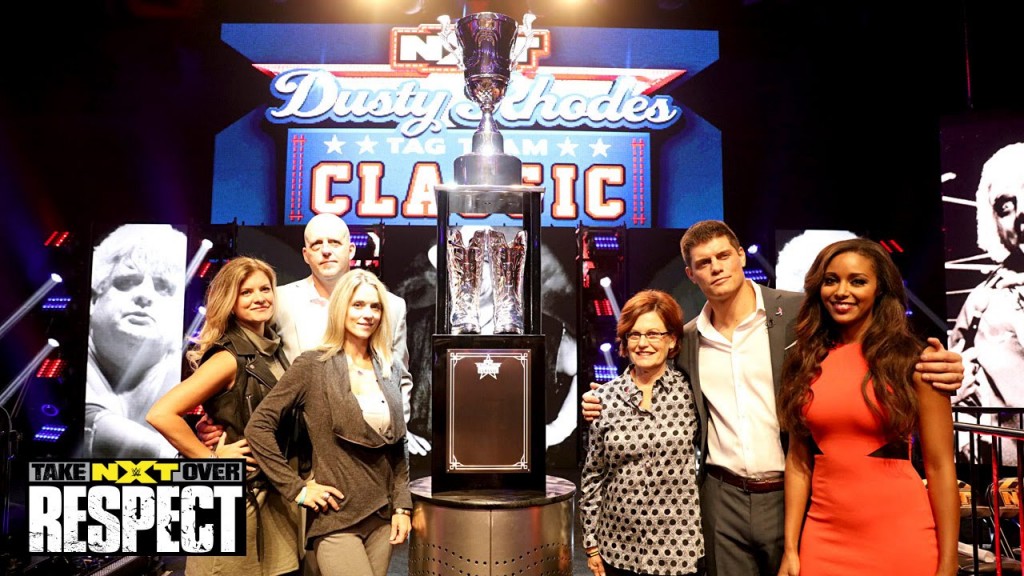 Dusty’s role in shaping NXT is well-known, and the entire RESPECT card was a fitting tribute to the Dream. The show captured Dusty’s era of wrestling, when the soap opera was the catalyst for and backdrop to the action in the ring; not the other way around.

There was a part me, conditioned to wrestling of the 1990s and beyond, almost cringing when Cody Rhodes took the microphone to present the Dusty Classic trophy to Joe and Balor. I was all-too prepared for the shocking, dramatic swerve that’s neither shocking nor dramatic, as it’s become the most passe staple of booking in the last two decades.

NXT hasn’t relied on the done-to-death pillars of big-league WWE booking. Much of what I loved about RESPECT is it’s the quintessential example that yes, a wrestling federation can respect its audience’s intelligence and still provide the necessary drama for a compelling show.

In fact, the NXT brand of drama, centered on pursuits of championships and simple yet realistic grudges, is far more compelling than the convoluted or outright silly angles that have bogged down WWE.