A few weeks ago I looked at the contenders in the Missouri Valley, and now it’s time to do the same for the Mountain West.  Following the departures of BYU and Utah and the addition of Boise State, the MWC has just eight teams.  There’s no way the top of the league will rival last season’s performances by BYU and San Diego State, but it is shaping up to be a three-team race, two of which were ranked in the most recent AP Poll.

Here’s a quick look at the three contenders, how they have looked so far, and what to expect going forward.

The Lobos are 10-2 and take an eight-game winning streak into Wednesday’s game at New Mexico State.  The teams actually met once already this season with the Aggies winning by nine points at The Pit.  New Mexico’s other loss came in the opening round of the 76 Classic, where they fell to Santa Clara in overtime after staging a late comeback.

Steve Alford’s club has yet to beat (or even play) a team ranked in Pomeroy’s Top 50.  Their best wins have come against Oklahoma State and Washington State on neutral floors and at home against Missouri State.  Consequently, it’s tough to have a great read on this team, but we should know more after their next two games against NMSU and at home against Saint Louis.

So far, the Lobos are getting it done with defense, ranking 11th in adjusted efficiency and placing 57th or better in each of the four factors.  They have allowed just two teams to score over 0.89 points per possession and just one to score over 1.00 ppp.  Opponents are making just 41.4 percent of their two-pointers and 31.9 percent from deep.

The Lobos have been adept at forcing turnovers as well, as evidenced by their opponents’ 24.6 turnover rate.  That has been pretty steady throughout the season, and after allowing some pretty gaudy free throw rates early on, they have done a significantly better job at keep their opponents off the line.

Offensively, the consistency hasn’t been there, and their last five games have been evidence of that.  Over that span, they have scored anywhere between 0.75 and 1.30 ppp.  Shooting has been the biggest issue, as the Lobos have posted an eFG% under 48.0 percent in six of their 12 contests.

In terms of individual performances, a few things stand out.  First, it’s been a mixed bag for point guard Kendall Williams.  On the one hand, he has been phenomenal at getting to the line, drawing 6.6 fouls per 40 minutes and posting a ridiculous 88.0 FT Rate.  His 31.3 assist rate is also an improvement over last season.  On the other hand, his shooting has been really poor (39.8 eFG%), and his turnover rate has shot up to 25.7.  If the Lobos want to win the MWC, they need much more consistency from Williams.

Big man Drew Gordon has continued to pound the defensive glass and has maintained a relatively high rate on the offensive boards as well.  He’s committing fewer fouls and drawing more, and he’s even shooting better once he gets to the stripe.  The only real complaint there would be that his shooting has fallen below 50 percent from the field, but despite an increase in playing time, his usage rate and shot percentage have fallen.  New Mexico would be well served to play through their big man more often.

Finally, sophomore Tony Snell is off to a great start.  He’s shooting 42.3 percent from three-point range and 59.0 percent from inside the arc.  He’s also increased his assist rate and has the highest ORtg on the team among players with usage rates of 20 or more.

One other player to watch during conference play is freshman Hugh Greenwood.  Despite a low usage rate, the Aussie has posted a strong assist rate and has really seen his minutes increase after the first two games.

After losing so much from last year’s squad, it was only normal to expect a decline in performance from the Aztecs.  And while their overall efficiency numbers are worse than last season, SDSU has still been impressive en route to a 11-2 record.  Their only losses have come on the road against undefeated Baylor and at home against Creighton, where they lost by just one point.  The Aztecs have three wins against Pomeroy’s Top 40 which is more than many teams can say, but six of their wins have been against sub-200 teams.  Given their next three opponents, they will certainly be 14-2 entering MWC play.

Offensively they’ve shown improvement after scoring 0.97 or less points per possessions during one four-game stretch earlier this year.  They have scored at least 1.12 ppp in four of their last five games, which is an encouraging sign for Steve Fisher’s squad.  That increase in efficiency has been right in line with a decrease in turnover rate.

There are a couple reasons for concern on the offensive end.  Their offensive rebounding rate is 172nd in the country, and given their relative lack of height, that isn’t likely to make a significant jump.  SDSU’s free throw rate is 150th, which might not be a bad thing since they shoot just 65.0 percent from the line.

The Aztecs also take a lot of three-pointers for a team that has just one key player shooting over 30.0 percent from deep.  So while Chase Tapley should keep firing away from deep given his 51.5 percent success rate from beyond the arc, Jamaal Franklin, Xavier Thames, and James Rahon are a combined 34-of-115 (29.6 percent) from three-point range.

With a mediocre offense, the Aztecs are staying in games due to a strong defense.  They rank 21st in opponents’ FT Rate, and for a team that does a poor job on the offensive glass, they are surprisingly effective on the defensive boards.

The area where they have really struggled defensively is forcing turnovers, as evidenced by a 20.0 turnover rate.  That number is continuing to drop after seven straight opponents have posted sub-20 turnover percentages.  They also rank 283rd in block percentage, again most likely due to their lack of size inside.

When looking at individual stats, the aforementioned Tapley is one of just three players with an ORtg over 100 and the only one over 107.9.  His hot shooting has been a big reason for his success, but he’s also cut down on his turnover rate.  Tapley is playing 83 percent of SDSU’s minutes and has seen his shot percentage jump from 18.7 to 26.1 this year.

Outside of Tapley, three other players are scoring in double figures.  Jamaal Franklin is the team’s second leading scorer and has a ridiculously high usage rate (31.0) and shot percentage (32.7).  However, thanks to his 30 percent shooting from deep, his eFG% is just 45.4.  He has done a solid job of drawing fouls, and the team would be best served if he settled for fewer three-pointers.  Franklin’s scoring has been rather inconsistent in recent games thanks to some poor shooting efforts.

Xavier Thames and James Rahon are the other two double-digit scorers.  Thames is second on the team with a 107.9 ORtg.  His outside shooting isn’t great, but he has a strong 29.0 assist rate to go with a 65.0 FT Rate.  Rahon’s outside shooting is also a question mark, and he has scored more than nine points just once in the last four games.

The Rebels have the best profile out of these three teams and look to be the favorite heading into conference play.  They are 13-2 with wins over North Carolina, Cal, and Illinois, with their only losses coming at Wisconsin and at Wichita State, both of whom are in Pomeroy’s Top 21.  They are also heavy favorites in their remaining three non-conference games, so they should be 16-2 by the time they take on SDSU in their league opener.

Their numbers in the other three factors have been up and down.  They posted turnover rates under 15 in the first two games, then had four straight games of at least 20.9, then four more of 18.1 or less followed by four of 20.0 or more.  Their OReb% has been over 40 percent in four games but under 30 percent in four others, including three of their last five games.  From a FT Rate standpoint, their numbers have ranged from 20.0 all the way up to 60.8.  The Rebels have posted a FT Rate of 40.0 or more in nearly half of their games and have hit that mark in three of the last four contests.

On defense, they have held opponents to 0.96 points per possession or less in 10 games and have allowed over 1.06 ppp just once when Wichita State posted a staggering 1.51.  They’ve done a solid job of limiting their opponents from two-point range, thanks in large part to a 13.6 block percentage.  UNLV is also in the Top 100 in limiting opponents OReb%.

Similar to what they have done on offense, their opponents’ FT Rates have been all over the place.  The same can be said of their turnover rate where they have had six games where opponents posted TO% of 16.1 or lower but just as many games of 28.4 or more.  Hopefully these numbers stabilize a bit during conference play so we can get a better idea of just how good this team can be. 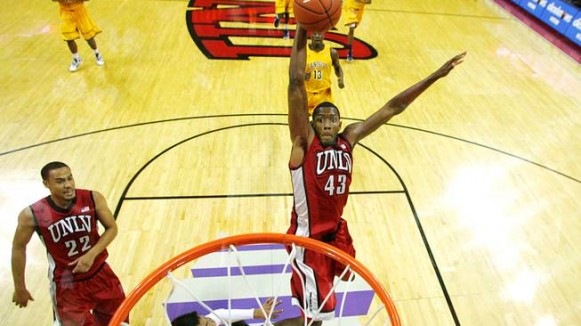 Individually, the biggest story for the Rebels has been UCLA transfer Mike Moser who is averaging 13.7 points and 11.2 rebounds this season.  He’s shooting 53.4 percent from two-point range and has shown the ability to knock down the occasional three-pointer.  Moser has been relentless on the glass, ranking just outside the Top 100 in OReb% and in the Top 20 in DReb%.  He has also done a nice job in terms of steal percentage, and given his effort level, it sometimes seems like there is more than one of him on the floor at a time.

Chace Stanback is leading the team in scoring and ranks just outside the Top 100 in ORtg at 123.6.  After making just over 36.2 percent from beyond the arc last season, he’s knocking down better than 45 percent this season.  That, coupled with a slight decrease in his turnover rate, has led to his increased efficiency.  Stanback was outstanding in the upset win over North Carolina, scoring 28 points and doing a great job of not forcing the action.

Oscar Bellfield and Anthony Marshall both have assist rates over 28.0 to anchor the backcourt.  Marshall has been effective at getting to the free throw line, while Bellfield has taken 77 of his 137 shots from beyond the arc, making 37.7 percent from deep.

The Rebels also have good depth, with guys like Justin Hawkins, Carlos Lopez, and Quintrell Thomas providing a lift off the bench.  That’s definitely an area that sets them apart from the rest of the league.

As of now, UNLV is my pick to win the league due to their superior balance between offensive and defensive efficiency, the combination of Moser and Stanback, and their level of depth and experience.  I wouldn’t be shocked to see New Mexico challenge the Rebels if they can continue their offensive improvement.  Quite frankly, any of these three teams could probably win the Pac-12, and I see no way at least two of them don’t make the tournament.