The national championship game is part of the Final Four, but National Semifinal Saturday is the time when all four teams play on college basketball’s grandest stage.

Here are 10 moments from Final Four national semifinals — five of them specific actions, five of them larger realities — that spoke profoundly about college basketball (not necessarily for the better) and the people who have shaped the sport over time.

PART ONE: THE REALITIES

In looking at the larger makeup of college basketball on a national level, it is striking how little the Pacific and Mountain time zones have been represented in the Final Four if you exclude UCLA and Arizona from the past 20 years of NCAA tournament history, UNLV if you include the past 30 years.

When Utah and Stanford reached the 1998 Final Four in San Antonio (and more than held their own in national semifinals against bluebloods North Carolina and Kentucky), the Western United States appeared ready to become much more of a factor in major college basketball. New Mexico was very good at that time. BYU has continued to make NCAA tournaments. San Diego State is a Sweet 16 program today. Gonzaga entered the public’s college basketball consciousness. Yet, the larger story of Western basketball (with Gonzaga never really taking off the ground; the notion that GU is an elite program is one of the pervasive myths of the present day) is that the Final Four remains a very elusive place for all but a few schools. Arizona will probably get there before too long. UCLA has placed itself in the conversation, and so has San Diego State. Yet, 1998 is a defining moment in Final Four history because of how aberrational it has proved to be.

On a similar level…

4 – THE ONES WHO SURVIVED: THE EXCEPTIONAL FINAL FOUR OF 2008

The 2008 Final Four marks the only time since tournament seeding began in 1979 that all four No. 1 seeds reached college basketball’s biggest party. The fact that all four 1 seeds have made the Final Four in only one NCAA tournament is an enduring testament to the difficulty of succeeding in this event on an annual basis. UCLA, Memphis, Kansas, and North Carolina created a piece of college basketball history that is important precisely because it is so rare.

3 – THE SUPER BOWL EFFECT, BEGINNING WITH THE SUPERDOME

It is true that the Houston Astrodome — the site of the landmark UCLA-Houston regular season game in 1968 — hosted the Final Four in 1971. However, it wasn’t until 1982 that the idea of “big-dome” basketball took off. Over 61,000 fans were neatly shoehorned into the Louisiana Superdome in New Orleans for the first Final Four broadcast in the modern era (the era of a seeded NCAA tournament) by CBS.

Black Rock took the event away from NBC and began its long association with the NCAA tournament in 1982. The immense success of that particular Final Four is what gave momentum to the idea that domes should host Final Fours on a regular basis, something that became a reality in 1997. No conventional arena has hosted the Final Four since 1996 (The Meadowlands in East Rutherford, N.J.). No arena will host the Final Four anytime soon.

The aesthetics of dome basketball don’t win many fans, but that’s a relatively trivial matter. The bigger story attached to the emergence of this kind of staging for the Final Four is that it underscores how much this is a ruthlessly competitive entertainment business based on revenue generation. Any debate about amateurism and the unique place of big-ticket athletes within the athletic-industrial complex (compared to non-revenue or “participation-based” sports) must include a reference to the way in which the Final Four has changed. The 1982 event represented the main source and driver of that transformation.

2 – BUTLER: ITS ARRIVAL, ITS RETURN, AND ITS DANCE PARTNER IN HOUSTON

The evolution of the Final Four and — while we’re at it — college basketball at large cannot be adequately documented without including the Butler Bulldogs. Butler’s presence in the 2010 Final Four, made even better by its ability to win a national semifinal, made a substantial statement to the rest of the one-bid conferences in Division I hoops. Being able to return for the 2011 event in Houston only increased the hope among other mid-majors that they, too, could be not just a second-weekend team in the NCAA tournament, but a third-weekend team.

Sure enough, Virginia Commonwealth — one of many schools that took heart from what Brad Stevens managed to achieve in 2010 — joined Butler for the 2011 version of National Semifinal Saturday in Houston. That Final Four matchup — two mid-majors with seeds both lower than 7 — affirmed the extent to which the mids could compete with the big boys. College basketball hasn’t been… and won’t be… the same.

1 – BY GEORGE, THAT WAS TRANSFORMATIVE

Everything said above about Butler and other mid-majors in college basketball (with Virginia Commonwealth joining the fun and Wichita State subsequently crashing the Final Four party last year) probably would not have been able to unfold had George Mason not cracked the Final Four code for the Little Guys of college basketball in 2006. Butler might be the best and most accomplished mid-major of the modern Final Four era, but George Mason will always be the most important one. 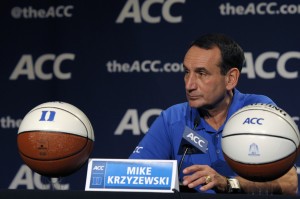 Coach K was a part of two of the more memorable moments in the history of the Final Four’s national semifinals. Both moments just happened to unfold in the same building, nine years apart.

ACC STANDS FOR “A COLOSSAL COMEBACK”

Mike Krzyzewski watched his gifted 2001 Duke team fall behind Maryland, 39-17, late in the first half inside the no-longer-standing Hubert H. Humphrey Metrodome in Minneapolis. Duke and Maryland staged an epic 15-round heavyweight bout in another big dome a few weeks earlier at the ACC Tournament in Atlanta. Getting blown off the court by the Terps would have left a deep wound in Durham, N.C. At that point, fighting to make the score respectable — to merely have a chance to win late in the game — was Duke’s first priority.

The Blue Devils did not merely have a chance to win in the final minutes.

The game featured some of the worst officiating in Final Four history (not relative to one team over and against the other; it was just bad on a general level), but Duke’s comeback — so rare in the life of this supersized event — merits inclusion on the short list of seminal semifinal moments. The comeback paved the way to a third national title for Coach K, but its bigger significance is that it defined Duke as the preeminent program of this generation. Duke, with a 2001 championship made possible by this comeback, was able to stack a title on top of the achievements of the great Hurley-and-Laettner teams of 1991 and 1992. Florida is, in many ways, trying to do in the 2014 Final Four what Coach K achieved in 2001.

Basketball official Pete Pavia felt it necessary to eject Dean Smith from the 1991 national semifinal between about-to-lose North Carolina and its conqueror, the Kansas Jayhawks. The controversial ejection represented a story in its own right, but it created a most unusual scene inside the Hoosier Dome in Indianapolis. Smith was coaching against his pupil, Roy Williams. He walked over to Williams and shook his hand before exiting the court.

This was such a big day for Smith. His North Carolina teams — always in the Sweet 16 from 1983 through 1990 — had never been able to make the Final Four. The 1991 event marked Smith’s return after a remarkable nine-year absence. His Tar Heels were favored to win that national semifinal, but one of his best students — Williams — outmaneuvered him. Smith’s life and career have been extraordinary. That 1991 evening in Indy, though, represented how frustrating the latter stages of NCAA tournaments proved to be for him and his teams over the years.

Duke had just beaten Indiana in a tense, hard-fought national semifinal in 1992 in the Metrodome. Mike Krzyzewski expected to have a warm postgame hug-and-handshake with his mentor and friend, Bob Knight.

It was well known (and documented) even then that Knight was a highly combative, volatile, and often crude figure. Surely, though, he was going to be gracious in defeat on a national stage since his opponent was one of his most treasured fellow-travelers on this earthly sojourn.

Knight’s blow-by handshake left Coach K unable to celebrate his team’s victory, to savor what he and Duke had just accomplished. Knight did far more damaging things to other human persons and groups in his career, but never was his ugliness more nationally visible than in that moment. It doesn’t resonate for good or happy reasons, but it does linger in the annals of Final Four semifinal history.

The NCAA tournament was still a rather small event (it had not yet expanded to as many as 40 teams) in 1977, and it was still unseeded. From this chaos emerged a Marquette team that was lucky to be chosen as one of the final at-large teams in that field. The team then nicknamed the Warriors made its way to Atlanta’s Omni to create one of the more unexpected Final Four assemblages in history. UNC-Charlotte, UNLV (not a household name at the time), and Marquette surrounded North Carolina in a quirky Four-some.

It was somehow oddly fitting, then, that the national semifinal between Charlotte and Marquette featured one of the wildest endgame sequences in college basketball (not just Final Four) history.

With three seconds left and the score tied at 49, Marquette — needing to cover 94 feet — found a March miracle. An 84-foot inbounds pass was deflected into the hands of Marquette’s Jerome Whitehead about 10 feet from the basket, squarely inside the lane. Whitehead promptly spun and dribbled toward the hoop, leaping to dunk the ball a moment later. Whitehead released the ball on his dunk attempt before the clock ran out. Charlotte star Cedric Maxwell blocked the dunk, but the ball was redirected off the backboard and into the basket as time expired. The jawdropping sequence lifted Marquette into the championship game, enabling the beloved Al McGuire to end his career with “seashells and balloons.” Marquette’s title, made possible by its semifinal escape on Saturday, represents — even now — one of the best feel-good stories the Final Four has ever witnessed.

Everyone was waiting for Ohio State’s Greg Oden and Georgetown’s Roy Hibbert to lock horns in the 2007 national semifinals in Atlanta’s Georgia Dome.

The officials made sure it didn’t happen.

In what remains — seven years later — the foremost example of touch fouls ruining a promising collision of stars in a spotlight event, Oden and Hibbert were not able to play extended minutes. Some of the fouls they committed were legitimate. Billy Packer, calling the game for CBS, predicted one of Hibbert’s second-half fouls before it happened, noting that Hibbert was getting tired and was prone to being half a beat late with a defensive reaction.

Basketball officials should not get all the heat for this and other such scenarios, however. Calling fouls is how the game and its contact are regulated. Calling fouls is, in itself, a good thing if meaningful (“advantage-gained”) contact is involved. However, when two big men such as Oden and Hibbert are whistled for multiple touch fouls, a significant part of the sport — competition between great athletes — is lost.

The 1983 NCAA Tournament — Jim Valvano’s foul-fest against multiple opponents — eventually led to the creation of the double-bonus on the 10th (non-shooting, non-player-control) foul against an opponent in a half.

We’re still waiting for the NCAA to push the foul disqualification level from 5 fouls to 6. The 2007 Oden-Hibbert national semifinal remains reason number one to do so.