This might seem counterintuitive to some, but it’s easier to identify great championship games than it is to arrive at a list of the best Final Fours in history. The reason is simple: A single game is being evaluated, not a set of three contests. Some of the greatest college basketball games ever played have graced the national championship stage. College basketball has been quite fortunate in this regard.

If anything, the central challenge involved in compiling this list lay in the process of leaving games off; filling out 10 slots was not particularly difficult. We’ll see if Kentucky and Connecticut can enter the conversation tonight at AT&T Stadium.

Though not crammed with the playmaking prowess of other championship games, this remains the defense-dominated duel on the list. Kansas big man Wilt Chamberlain was named the Most Outstanding Player of the 1957 Final Four, and yet, over the course of 55 scoreboard-clock minutes, he and his Jayhawks were unable to overcome Lennie Rosenbluth and the rest of the Tar Heels, who — in the decade before the UCLA dynasty — went unbeaten in the 1956-1957 season. A year earlier, San Francisco produced a perfect campaign. The late 1950s and early 1960s represented a period of college basketball which managed to blend great individual teams with considerable competitive quality. You’ll find other games from a seven-year stretch — 1957 through 1963 — on this list.

Some might view this as recency bias, but have the past 12 months truly eroded our memories of how good Michigan-Louisville turned out to be? Last year’s title tilt between the Wolverines and Cardinals featured spectacular shotmaking, and not just from Spike Albrecht and Luke Hancock. These two teams played a high-energy game on a sustained basis without spiraling out of control. Each side withstood substantial runs and regained its composure.

The late 1950s and early 1960s stood out in that the Most Outstanding Player at the Final Four was often a member of the team that lost the title game. Such was the case in 1961, as Ohio State’s Jerry Lucas was denied in a bid for a repeat national championship at the hands of Cincinnati. The Bearcats — no longer playing a fast-paced style under former coach George Smith and program icon Oscar Robertson — seamlessly shifted to a new winning way under coach Ed Jucker. Cincinnati outlasted Ohio State in overtime, 70-65, showing once again that it is more than possible to win even if you don’t have the best player on the floor.

The dynamics mentioned above in “1961 Ohio State-Cincinnati” also applied to 1959’s title game between West Virginia and California.

West Virginia touted that Final Four’s MOP, Jerry West. Zeke from Cabin Creek scored 28 points against a Cal team coached by Pete Newell, a man who preferred to teach big men as an instructor, instead of enduring the all-consuming stress of live in-game coaching. Newell got the better of John Wooden when he reigned in Berkeley and the Wizard of Westwood had not yet earned his nickname at UCLA; had Newell been able and willing to stomach the pressures of the coaching profession, the history of college basketball — in the West and throughout the nation — might have been dramatically different.

At any rate, Newell did not step away from the bench before his best California crew fended off West’s best effort in 1959. The 71-70 win belongs in the pantheon of great national championship tussles.

The 1980s represented one long, continuous gift to the sport of college basketball and its community of fans. No decade produced more unforgettable championship games or more indelible Final Four moments that will stand the test of time.

The 1988 title game (Kansas-Oklahoma) and the 1986 clash (Louisville-Duke) were terrific games… and they didn’t even make the cut. The 1983 title fight (North Carolina State-Houston) represents one of the most historic and written-about games in the sport’s history, but the way in which it was decided — one team fouling the other on a repeated basis, getting the stream of missed front ends it sought — makes Wolfpack-Cougars something less than an all-timer in terms of pure quality.

Michigan-Seton Hall overflowed with electricity and excellence, primarily from Michigan’s Glen Rice and Seton Hall’s John Morton. The two sharpshooters engaged in a memorable duel on a night when two schools that had been removed from the college basketball spotlight for much of the 1980s were able to close the decade with a flourish. Neither team was a top-two seed in that NCAA tournament. Arizona, Illinois, Georgetown, and other heavyweights didn’t reach “Monday Night,” as the title game is sometimes referred to in shorthand. This might have been a middleweight or welterweight contest, but it soared in Seattle.

The main reason this game isn’t higher on the list is that it was decided by a phantom foul call on Seton Hall’s Gerald Greene with three seconds left in overtime, enabling Michigan’s Rumeal Robinson to hit two foul shots and win the game for interim head coach Steve Fisher. 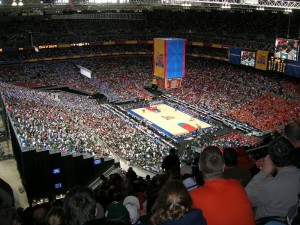 The past 15 years have not provided many memorable national championship games, but the 2005 Final Four offered a welcome exception when North Carolina cut down the nets.

“The 2005 NCAA Tournament began in March; it ended in April; and it belonged to (Sean) May.”

Jim Nantz’s best line in a 24-year career as the TV voice of the Final Four came at the end of North Carolina’s riveting win over Illinois in St. Louis. Sean May, Raymond Felton, Marvin Williams, and the rest of the Tar Heels proved to be slightly stronger than Luther Head, Deron Williams, and the Fighting Illini in a mighty collision of titans that was everything hoopheads hoped it would become.

The Syracuse Orangemen (now the Orange) carried the run of play for most of this game, dominating above the rim with Derrick Coleman and Rony Seikaly in a manner Kentucky hopes to replicate one more time against Connecticut. Yet, Indiana stayed in the hunt because of the long-range marksmanship of Steve Alford, the player who benefited more than anyone else in the 1986-’87 season from the introduction of the three-point shot.

It’s true that Syracuse — a bit like Houston in 1983 — lost this game at the foul line, which takes away from the quality of a great game, but Keith Smart had to hit his onion-rich 16-foot baseline jumper with four seconds left to put Indiana over the top. This is a game that’s still talked about 27 years later, and while Smart’s shot is the central point of focus, Syracuse-Indiana is rightly remembered as a battle of two highly-skilled teams that showcased the full array of their basketball gifts.

Sherman Douglas, Dean Garrett, Greg Monroe, Rick Calloway — college basketball fans remember these names, and how much texture they lent to a genuine classic in New Orleans, one of the most charmed host cities in Final Four history.

… and a freshman named Michael Jordan.

Few national title games in the 76-year history of the NCAA tournament have provided similarly rich collections of distinguished NBA players. Georgetown-North Carolina might have been a “New Money-Versus-Old Money” matchup in much the same way that Connecticut-Kentucky will be tonight, but the benefit of hindsight shows that there was nothing about Georgetown which was consistent with the notion of an “upstart” team. The Hoyas engaged the Heels in 40 minutes of mortal combat, and after 39 minutes and 50 seconds of magic, one moment of frailty — Fred Brown’s wrong-way pass to Worthy — made the difference.

This game dripped with historical resonance — partly for Ewing’s series of intentional goaltends early in the first half, and partly for John Thompson’s hug of Brown at game’s end, a scene that would set the stage for a happier embrace two years later, when Georgetown won the 1984 national title. Most of all, North Carolina’s 63-62 victory finally gave Dean Smith a national championship after decades of finishing second or third at the Final Four. This game mattered to many people for reasons removed from the quality of play…

… but the quality of play on this night in New Orleans was sublime. Georgetown-UNC 1982 is rightly remembered as one of the high points in college basketball history. That it happened to be a national championship game only adds to its luster, nearly a third of a century later.

College basketball diehards, if asked about the significance of that number, will know exactly what it means.

The cover photo above shows the Loyola of Chicago Ramblers being welcomed home to the Windy City after defeating Cincinnati in overtime, 60-58, to win the 1963 national title. The welcome was richly deserved not just for the achievement itself, but because of the quality of the game and the opponent.

This detail might get lost for those unaware of college basketball history, but Cincinnati — just one year before UCLA’s great run began in 1964 — had a chance to win a third straight national crown when it took the court against Loyola. The Bearcats were also making their fifth straight Final Four appearance, marking them as a dynastic (or at least semi-dynastic) program.

Cast aside the (enormously significant) social, cultural and racial elements of this game, one in which a majority of each starting lineup was comprised of African-American players. Strictly in terms of the quality of basketball on display, this was one of the sport’s masterpieces, involving two great teams and the possibility of a “three-peat” long before Pat Riley coined the term.

With the score tied at 58 in the final seconds of overtime, Loyola’s Vic Rouse put back a Les Hunter miss to dethrone Cincinnati. The 1980s — with an expanded NCAA tournament field; increased coverage by CBS; and improved video technology, among other things — might be remembered as the decade in which great national championship games were imprinted in the mind’s eye. Yet, in the age before college basketball became a television magnet, Loyola-Cincinnati established itself as the most distinguished crowning collision of all time.