The Kansas Jayhawks, with roots that can be traced to the founder of basketball, Dr. James Naismith, have won three NCAA tournament championships.

The Louisville Cardinals, who made six Final Fours under Denny Crum and three more under Rick Pitino, have won three NCAA tournaments as well.

Oklahoma State (formerly Oklahoma A&M), the program of names such as Iba and Sutton.

Ohio State, led by Jerry Lucas and Jim Jackson and Greg Oden and Jared Sullinger over many decades.

These programs have all labored through the decades, trying to become mountaintop schools in college basketball. Kansas and Louisville can naturally say they’ve largely succeeded, and they’d be right.

Yet, even the Jayhawks and Cardinals — drenched in history and tradition — cannot say what the Connecticut Huskies can say right now: “We have four NCAA tournament titles.”

Only five other programs can make the claim, and only four can say they have more trophies than the Huskies. UCLA (11), Kentucky (8), North Carolina (5), and Indiana (5) are the only four major college basketball programs with more national titles than UConn. That’s what coach Kevin Ollie and some of Jim Calhoun’s recruits achieved inside AT&T Stadium.

Monday night’s win over a slightly-lower-seeded Kentucky team in a Texas-hosted Final Four, powered by an unconquerable point guard made of sinew and bone and pure steel, was all too much like 2011 for Connecticut. That national semifinal three years ago in Houston was also a defense-first game. Plenty of words will be devoted to the way in which Shabazz Napier retraced the steps Kemba Walker took in 2011, and that will rightly become one of the sidebar stories attached to yet another improbable march to a national title in New England.

The central story, though, will read like this: No matter the coach or the point guard or the Texas city, players with “UCONN” on the front of their jerseys mastered the Final Four once more.

Now 8-1 in Final Four games — 4-1 in terms of Final Four success rates — Connecticut has become one of only six schools to win at least four national titles. This massive achievement, dripping with long-term historical resonance, has been forged in the span of only 16 seasons, beginning with 1999’s win over Duke in St. Petersburg, Fla.

Kentucky certainly enhanced its own reputation as a program over the past three weeks, but Connecticut — by winning this game on this night in this high-stakes situation — has established superiority over and against everyone else in major college hoops in the past two decades. The story of college basketball will change with each year, but for now, UConn — so new to these discussions of history and immortality and legacy — looks down on everyone, and not just with respect to a single season or even the past four years, which it has crammed with two titles.

Connecticut is The Closer in college basketball. This is no longer a point of debate — at least not tonight. When Niels Giffey stopped this drive by Kentucky’s James Young just before the 3:10 mark in regulation with Connecticut leading, 56-52, the Huskies surmounted the last tall obstacle they faced on the road to a fourth national title.

How do you become The Closer in your sport, the Connecticut Yankees of King Kentucky’s court? How do you find the ability to win four national titles in 16 seasons? You get step-up efforts from a guy like Jake Voskuhl in 1999; Rashad Anderson in 2004; and Alex Oriakhi in 2011.

You get a game-saving performance from Niels Giffey in 2014.

Shabazz Napier was rightly named the Most Outstanding Player of the 2014 Final Four, and his presence over the course of 40 minutes naturally carried UConn to the title on a larger level. Yet, when you trim away the fat from this game and boil it down to its most defining moments, Giffey was the bridge between a tenuous situation near the 6:30 mark of regulation and a last-minute celebration hastened by a spectacular coaching gaffe from Kentucky’s John Calipari.

It was Giffey who hit a three-pointer to turn a 51-49 UConn lead into a small but real 54-49 cushion with a little over six minutes left. It was Giffey who stood up (literally and figuratively) to deny the man who donned a cape for Kentucky in the second half — high-flying dunker and relentless rim attacker James Young — with just over 3:10 left in regulation. For good measure, Giffey snapped down the rebound of Young’s miss. That was the last possession of the night in which Kentucky had a chance to cut UConn’s lead to two points or fewer.

If it’s true in basketball that you need your stars to step up — as has been the case for UConn in its championship runs over the past 16 years — it is just as true that you need something of noticeable substance from your role players as well. Giffey provided that tipping-point contribution, and that gave Connecticut the final push it needed to fend off Kentucky. 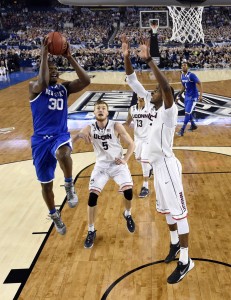 Julius Randle continued to do what he reasonably could for Kentucky, but the Harrison twins finally ran out of shotmaking magic against Connecticut.

It is quite instructive to note that this was not the offense-first game Kentucky had played for most of the previous three weeks.

This was not a stroll to the 70s, one in which offensive flourishes were found in abundance. Connecticut’s defense — with enough length near the rim to bother Kentucky’s bigs (this might have been the matchup in which Willie Cauley-Stein could have tipped the scales toward Big Blue; we’ll never know) — didn’t allow UK to play volleyball on the glass. The Huskies’ backcourt defense — with Napier and Ryan Boatright controlling the Harrisons — made sure that Kentucky’s offense didn’t have the last word on Monday.

It’s true that whatever chance Kentucky had of making a comeback in the final minute evaporated when Calipari allowed Connecticut to run 44 seconds off the clock (1:09 to 0:25) without having to face a one-and-one. The blunder closely resembled what happened to Michigan’s John Beilein last year against Louisville. (Beilein’s Wolverines took 23 seconds — 0:52 to 0:29 — to finally put Louisville at the foul line in the last minute of regulation when trailing by four points as well, 78-74.)

Yet, in order for Connecticut to establish such leverage in the first place, the Huskies had to cut against common sense in a certain respect.

Kentucky had mastered the not-so-elegant art of the ugly possession, the missed shot cleaned up by the weakside rebounder or the pell-mell drive ending with a putback or foul shots. Kentucky’s ability to win loose-ball scrums near the basket and turn ugly plays into beautiful results became a recurring theme in this tournament.

It says a lot about Connecticut — everything, one could argue — that the Huskies could play a rough-and-tumble game against a brawny, oak-tree-laden opponent and make it work to their own advantage. 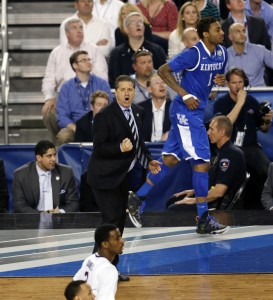 John Calipari stood out from the crowd on Monday night, but not in a good way. His game management in the final 70 seconds killed Kentucky’s chances of mounting a comeback.

Connecticut closed down Kentucky — on offense in general, on the offensive glass in particular. The Huskies went 10-for-10 at the foul line while Kentucky faltered at the not-so-charitable charity stripe. Whenever Big Blue tried to pry open the door to yet another tournament comeback, UConn kept the door closed.

The Closer in college basketball did whatever it needed to do, precisely when it encountered each and every moment of truth on Monday night.