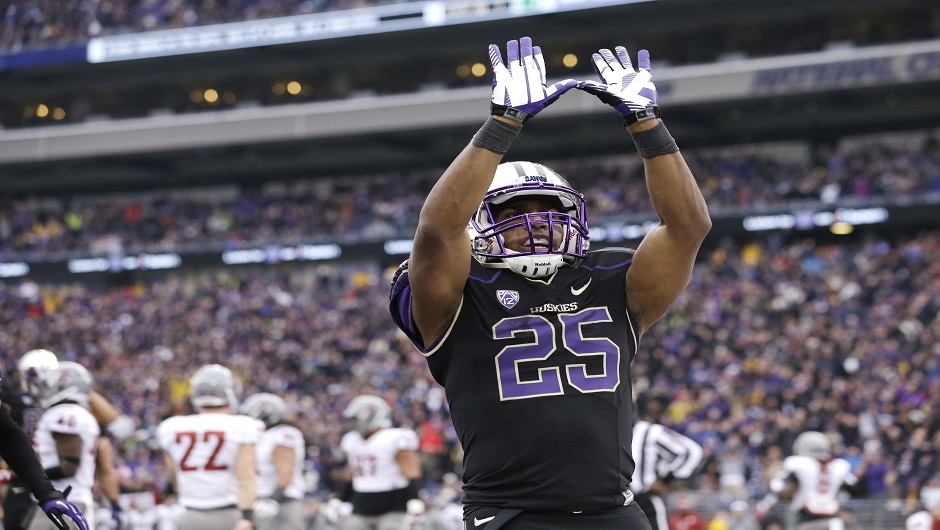 Bishop Sankey enters the 2014 NFL Draft as one of the most productive and prolific ball carriers in recent years. The 5-foot-10, 209-pound running back lit up opposing Pac-12 defenses over the past two seasons for the Washington Huskies, racking up 3,214 rushing yards and 34 touchdowns (including a school-record 18 rushing touchdowns in 2013).

Replicating that type of production at the NFL level will be difficult in a league that features pass-heavy offenses. However, his repertoire makes him an intriguing prospect who could very well be the first running back taken off the board.

STRENGTHS
Despite his slightly below-average size (5-foot-10, 209 pounds), Sankey excels as an inside runner because of superb vision and top-level acceleration from the handoff. He does a great job quickly finding the hole and bursting through the line of scrimmage (see below).

Sankey is a hard-nosed runner. His legs are always churning, powering him through opponent’s arm tackles and into the second level. The former Husky rarely goes down on first contact as his power and elusiveness with the football in his hands make him a difficult man to wrap up and bring down one on one.

Often operating deep in the backfield at Washington, out of the shotgun, Sankey showcased lethal lateral agility that enabled him to escape unscathed on inside handoffs and draw plays. It benefited him as a receiver as well, where he showed the ability to turn a simple screen play into a big gain. The Washington standout caught 58 passes over his final two years with soft, reliable hands out of the backfield.

As a blocker, Sankey is better than expected. Despite usually being at a size disadvantage, he does not shy away from contact and succeeds because of it. He uses his power to meet head on with oncoming pass rushers and does his best to hold down the fort long enough for his quarterback to make a play down field.

WEAKNESSES
Sankey carried the football 653 times over the last two seasons at Washington, so concerns about wear and tear and his overall durability going forward are understandable. It is worth noting, however, that he did not miss a game during his collegiate career.

While he’s more than happy to engage in pass protection, he relies too heavily on the chop block to slow pass rushers. Top-tier pass rushers in the NFL will embarrass him if he does not improve.

Sankey prefers to bounce runs to the outside a bit too often despite being an adept inside runner. At the college level, it paid off sometimes, but he will not have the same success doing so in the NFL.

Matt Waldman detailed some interesting concerns at Football Outsiders regarding Sankey’s potential in certain offensive schemes. Waldman notes that Sankey has trouble reading linebackers and secondary personnel, and may benefit playing in a gap-style offense rather than a zone-blocking scheme (which many teams currently employ).

Additionally, despite elite acceleration and a 40-yard dash time that clocked in at 4.49 at the NFL Combine, he doesn’t have great long speed and won’t beat a defensive back in a foot race down the sideline.

WHAT TWITTER IS SAYING
Here’s a little bit of what some folks are saying about Sankey:

Always a few kids that really just “get it” and you want to draft for football and personal reasons. RB Bishop Sankey is one of those kids.

Boom RT @evansilva: Greg Cosell on Bishop Sankey: “A complementary, sub-package role player … He would go down on first contact a lot”

NFL OUTLOOK
Sankey is unlikely to be used as an every-down back but should still get the majority of the reps out of the backfield in a few seasons’ time.

While it couldn’t hurt to bulk up a bit, the Spokane native runs much bigger than he appears and should benefit greatly from this quality. His abilities as a receiver and in pass protection are even greater qualities in a league that has shifted toward the pass. A running back that can block and catch is integral to a team’s success, especially in a West Coast offense, and should factor into where Sankey is selected on Draft Day.

Among this year’s top running backs, Sankey may be the most well-rounded prospect available with great potential as a featured back in the NFL. He may not be a first-round selection (there may not be any running backs taken on day 1 this year, for that matter), but he certainly has the talent to play like one for as long as his legs will allow. Sankey has the skill set to excel at the pro level and be a vital contributor for the foreseeable future.

CBS Sports’ Rob Rang compared Sankey to the Cincinnati Bengals’ Giovani Bernard, which really, is spot on. Bernard was last year’s first running back drafted and backed it up with a strong rookie season that included 695 yards rushing, 514 yards receiving and eight total touchdowns. You can expect similar production from Sankey in 2014 if he’s an integral part of an offensive system he can really thrive in.

Lou Musto is a staff writer here at The Sports Daily. You can follow him on Twitter @LouisMusto.