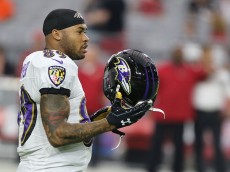 Even on one leg, Baltimore Ravens wide receiver Steve Smith Sr. is confident he’s faster than Denver Broncos quarterback Peyton Manning. Not even Manning’s 12-yard scramble in the AFC championship game could change his mind. Smith, who is rehabbing from an Achilles injury, said on The Dan Patrick Show last week “it’d be a photo finish” […] 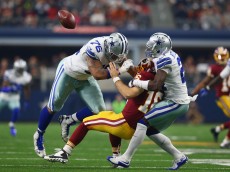 While the sentiment in the Cowboys organization seems to be moving toward letting Greg Hardy walk, the troubled defensive end has at least one guy in his corner. Dez Bryant told Vinnie Iyer of The Sporting News, via Pro Football Talk, that he’d like to see Hardy in a Cowboys uniform again next season. Hardy […] 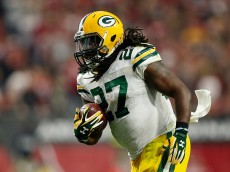 The Green Bay Packers want running back Eddie Lacy to lose a substantial amount of weight this offseason. According to 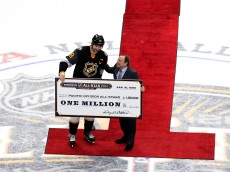 John Scott’s appearance and performance in the 2016 NHL All-Star game is the best story of the weekend, and if you didn’t get to see him get in on the 3-on-3 action, you’ll need to read on. Scott was voted into the game by fans as a write-in candidate, as he currently plays in the […] 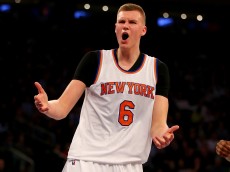 New York Knicks big man Kristaps Porzingis can do it all. He can shoot, defend the basket, score the ball and he can dish, as evidenced by the great no-looker he threw in Sunday night’s game against the Warriors. The fourth overall pick in this year’s draft drew a double team on one particular play, […] 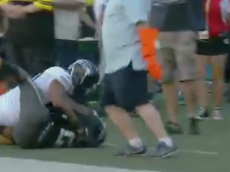 One of the only good things about the new format of the Pro Bowl is that teammates can be drafted to play on opposite teams and go against each other. And while this happens all the time in practice, the cameras aren’t there to broadcast it to the world. Furthermore, in the Pro Bowl, it […] 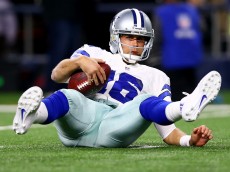 It’s the holiday season, and as usual, Dallas Cowboys quarterback Matt Cassel was in a giving mood during Saturday night’s 19-16 loss to the New York Jets. The problem, however, is that Cassel often hooks opposing defenders up, rather than his teammates, as he’s tossed seven interceptions and just five touchdowns this season. But none […] 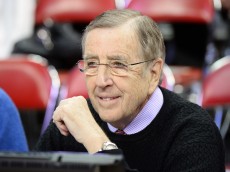 BYU is currently getting destroyed by Utah in the Las Vegas Bowl. It’s really not pretty, as the Utes have taken a 35-7 lead into the half and have been dominating all facets of the game, which doesn’t project well for the final two quarters. But Cougars fans have ESPN analyst Brent Musburger’s sympathy! He […] 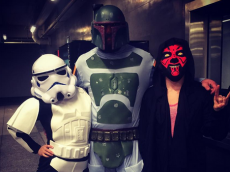 UFC women’s bantamweight fighter Ronda Rousey has been struggling since her recent loss to Holly Holm, but at least she’s still finding ways to let loose and enjoy life outside of the ring. Rousey hit up “Star Wars: The Force Awakens” on Thursday night with her boyfriend, Travis Browne, and some other guy who we […] 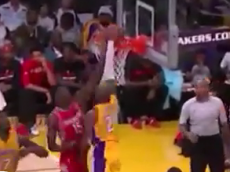 Throwback Thursday was in full effect on Thursday night, when Lakers guard Kobe Bryant turned back the clock and threw down a sick dunk over Rockets forward-center Clint Capela. The crowd at Staples Center erupted when Bryant elevated and did this: The Lakers’ bench seemed to enjoy it, that’s for sure. Swaggy P and Dwight […] 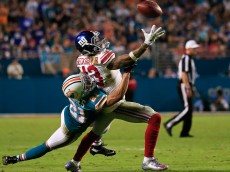 Yes, Ron Rivera went there. When talking about Odell Beckham Jr., the Panthers coach brought up Jerry Rice. Ron Rivera on Odell Beckham: “I played against Jerry Rice, and I see a lot of flashes of Jerry Rice in his game.” — Dan Graziano (@DanGrazianoESPN) 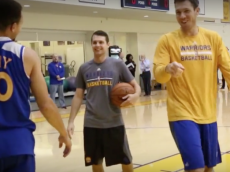 Stephen Curry has the best stroke in the NBA right now, and when he shoots, he doesn’t miss often. He’s so good that he’s been known to celebrate his shots before they even go in. Here’s something that may shock you about him, though: He recently lost a shooting contest to his head coach, Luke […] 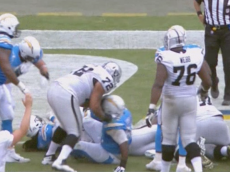 Things got a bit chippy in the second quarter of Sunday’s Raiders-Chargers game. Donald Penn and Corey Liuget got into it after the play, and the Raiders offensive lineman shoved the Chargers defensive end. Instead of getting up and pushing him back, Liuget elected to go with a cheap shot, and he kicked Penn in the […] 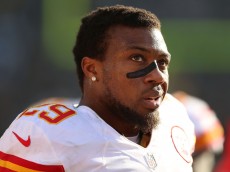 Chiefs All-Pro safety Eric Berry, whose 2014 season was cut short after he was diagnosed with Hodgkin’s lymphoma, is now cancer-free and returned to the field this season. He recorded his first interception since beating cancer in Sunday’s game against the Steelers, and did so in style. Eric Berry is healthy and intercepting NFL passes. https://t.co/WmgQqM1lLM […] 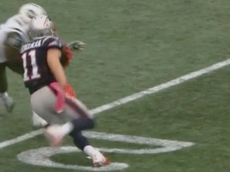 Wide receiver Julian Edelman is a tough player and has absorbed many big hits during his tenure in the league, as many pass-catchers that line up in the slot often do. Edelman caught an eight-yard pass from Tom Brady in Sunday’s game, and after watching the hit he took from Jets cornerback Buster Skrine immediately […] 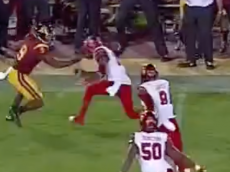 USC wide receiver JuJu Smith-Schuster played a huge part in the team’s 42-24 upset win over Utah on Saturday. Smith-Schuster hauled in eight catches for 143 yards (one touchdown) and abused the Utes defense all game. He also abused a defender on one particular play with a brutal stiff arm. Smith-Schuster was looking to rack […] 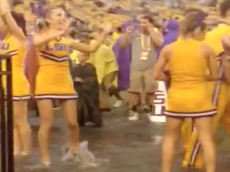 LSU squared off against Western Kentucky at Tiger Stadium on Saturday night, but it’s a wonder that they even got the game in, as plenty of rain from the end of Hurricane Patricia tried to derail their plans. As you can see, it was raining cats and dogs before the game even kicked off. The […] 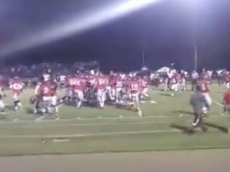 Well, usually in a 48-0 game, the winning team will just keep running the ball so the clock runs faster and the game ends sooner. Eastern Mississippi Community College and Mississippi Delta Community College had a different idea. They brawled with 59 seconds remaining in the first half. Instead of footballs being thrown around on […] 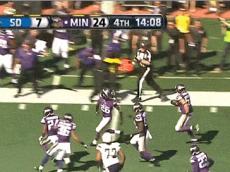 The Minnesota Vikings beat the San Diego Chargers Sunday by the final score of 31-7. It was a snoozer, but with about 14 minutes left in the game, Vikings linebacker Chad Greenway picked off quarterback Philip Rivers and returned it 91 yards for a touchdown. That still wasn’t particularly interesting, but on the return, the official […] 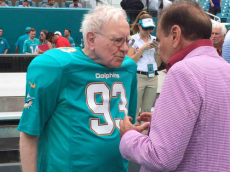 Berkshire Hathaway CEO Warren Buffett has long been a supporter of Ndamukong Suh, as the two are both University of Nebraska alumni. They have hung out multiple times in the past, and even arm-wrestled earlier in the year. Buffett hit up Sunday’s Bills-Dolphins game, and did so wearing a Suh jersey. Even better, though, is […] 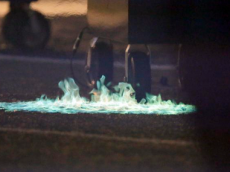 Are you ready for some football? Well, they weren’t quite ready in St. Louis, at least not at 1 p.m. on Sunday. The game between the Steelers and Rams was delayed 25 minutes because the turf at the Edward Jones Dome caught fire during pre-game introductions, according to Pro Football Talk. The damage to the turf was just […] 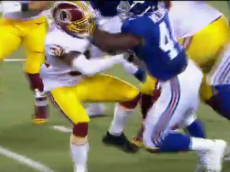 New York Giants running back Andre Williams probably won’t be boasting about his yards per carry in Thursday night’s game against the Redskins. Williams, who had only 12 carries combined during the season thus far, finally saw some action on Thursday but didn’t do much with the opportunity. Williams rushed 14 times for 29 yards […] 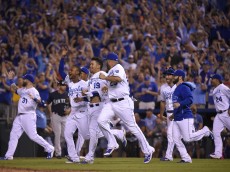 MLB’s longest drought between division titles is officially over. The Kansas City Royals defeated the Seattle Mariners, 10-4, in front of a packed house at Kauffman Stadium on Thursday night. With the victory, the Royals clinched their first division title since 1985, and it’s the first time they’ve won the AL Central in franchise history […] 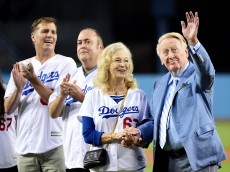 It’s hard to imagine watching a Los Angeles Dodgers game without Hall of Fame broadcaster Vin Scully calling it. For 66 years Scully has been serenading baseball fans with sound analysis and compelling stories during games, and we’re lucky that he recently announced he’ll be returning next season (although he also said it will likely […] 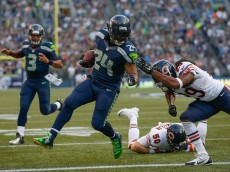 Nine teams started the 2015 NFL season with 0-2 records. Some weren’t huge surprises, such as the rebuilding Chicago Bears. But no one forecasted the Seattle Seahawks, Indianapolis Colts, Baltimore Ravens, Detroit Lions and Philadelphia Eagles to all be without a win after two weeks. Which teams will finally get into the win column in Week […]