The Chicago Bears’ 2014 campaign hasn’t turned out the way the team had hoped it would. The (3-6) squad isn’t playing anywhere near its potential—given the plethora of talent on the roster—and there’s been talk of dissension between players and coaches.

Wide receiver Brandon Marshall has been quite outspoken about the current state of the team, as he recently said it’s “bad all around” in Chicago. And now, he’s engaging in verbal sparring with hecklers on social networking sites as well.

When one particular heckler—a Twitter user named @AnthonyGKalla—made a derogatory comment about Marshall’s mother and pointed out that the Bears are in last place, the five-time Pro Bowler offered him $5,000 to step into the ring and fight.

@AnthonyGKalla: @BMarshall idk if you saw this on ig but here’s a reminder http://t.co/GYT7hj3mWe I give you 5k to get in a ring with me.

The heckler—who, at this point, likely realized his card had been pulled—backpedaled and asked for more money. Marshall responded and had no problem raising the stakes.

“@AnthonyGKalla: @BMarshall that’s it? Cmon brandy make it 25 and we can do it in Detroit” 25 it is. Ha! You thought i wouldn’t say yes.

“@AnthonyGKalla: @BMarshall that’s it? Cmon brandy make it 25 and we can do it in Detroit” And you have to apologize to my mom. — Machine Marshall (@BMarshall) November 13, 2014

After Marshall increased the wager to $25,000 and asked for an apology to his mother, the Twitter troll remained quiet and did not respond.

@AnthonyGKalla Deal or no deal bro? This is your chance to back up your talk and make 25k.

A short while later, the heckler made his Twitter account private. But not before he posted this. 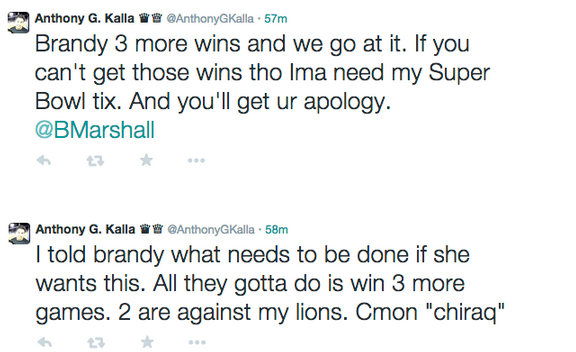