But it’s a long offseason, and Khalifa isn’t done trying to help upgrade the Seminoles’ roster just yet.

In hopes of improving the team’s secondary, she sent a tweet to five-star cornerback recruit Iman Marshall and asked if FSU was going to be his college choice. Marshall still has yet to reveal where he plans to play, but Khalifa must have thought she could get the information out of him. After all, she’s a powerful woman.

FSU is the move, right @iman_marshall8? 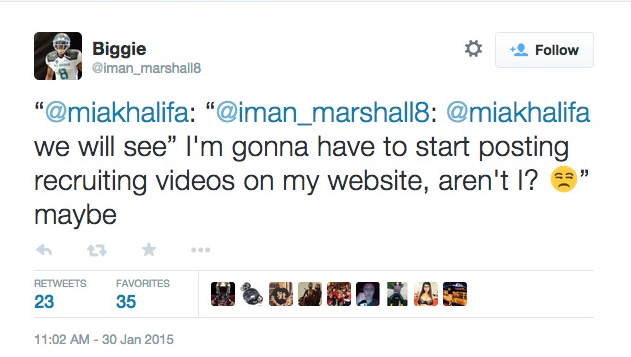 Marshall didn’t seem too enthused over Khalifa’s offer. But maybe she’ll inspire him to go back and take a second look at FSU, if he hasn’t already.

As for Khalifa—even though her Twitter profile lists her as the Seminoles’ unofficial mascot—she may want to refrain from courting other players in the future. FSU could get hit with a recruiting violation as a result of her actions.