Before the season started, UConn Huskies football head coach Bob Diaco had said that wide receiver Noel Thomas had a chance to become a special player in Storrs, CT. So far Thomas has made Diaco look good on that.

When you get a chance to see Thomas play, you can tell he’s a step above the rest. But it’s what he does in practice that makes him a better player.

You’ll see him working with the younger guys, whether it be on the JUGS machine or working on their hand/eye coordination to helping with routes, Thomas is there being a leader.

During his press conference on Tuesday, Diaco talked about Thomas’ growth. Thomas also talked about what he’s done on and off the field to be a better person and football player.

All along his tenure at UConn, head football coach Bob Diaco has talked about the next man in philosophy. By this he means, if you’re a backup, you’re expected to come in an do your job.

With the loss of Tommy Myers at tight end, others will now be called upon to do what Myers did. And it won’t be easy as he did just about everything on offense except pass the ball.

Chris Lee has replaced him on the depth chart but is just a true freshman. He’ll play but guys like Max DeLorenzo and last week’s hero, Garrett Anderson, will have to step up.

During his Tuesday press conference, Diaco talked about how hard it will be to replicate what Myers did.

Believe it or not, Temple Owls LB Tyler Matakevich was recruited by the UConn Huskies. But it wasn’t the football team, it was the baseball program.

You can’t blame UConn football head coach Bob Diaco for that one. It came under the regime of Paul Pasqualoni, who seemingly had the ins of keeping a good player like Matakevich in the state.

Instead, he got away to Temple and has been wreaking havoc on teams including UConn football.

On Tuesday, Diaco talked about Matakevich and gave a quick preview of the Temple offense and defense.

For the first time since the 2010 season, the UConn Huskies football team will be going to a bowl game. While it won’t be the Fiesta Bowl like the last time, it’s still a bowl game.

The UConn football team will learn their destination most likely next weekend. But in the meantime, there’s just as an important piece as getting to a bowl game, extra practices.

With a young team, just 14 seniors, extra practices are beneficial from a developmental stand point. And as UConn football head coach Bob Diaco pointed out in his press conference on Tuesday, it shortens the offseason.

After Saturday’s 20-17 win over the Houston Cougars, students and fans of the UConn Huskies football team stormed the field to celebrate the big win and bowl eligibility with the team.

When the students and fans got to UConn football head coach Bob Diaco, they tried to mess his hair up. Unfortunately for them they didn’t get too far. 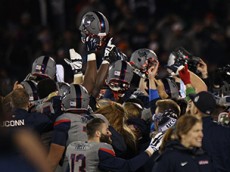 Here is a photo gallery from the Houston Cougars vs UConn Huskies college football game at Pratt & Whitney Stadium at Rentschler Field in East Hartford, CT on November 21, 2015 […]

From the day that UConn football coach Bob Diaco took over the program, he said he was going to build it the right way and get the program back to respectability […]

At 5-5, the UConn Huskies football team has a chance to do something it hasn’t done since the 2010 season. And that’s become bowl eligible.

As UConn football coach Bob Diaco continues to build his program, getting bowl eligible can help the programs in many different ways.

With the last regular season game on November 28 at Temple, Diaco would be able to hold practices up until bowl bids are announced if the Huskies were bowl eligible. And if they made a bowl game, he would get another 15 practices as part of preparing for the game.

Extra practices like these would huge for a young team. And that’s not even mentioning recruiting.

Most importantly, it would be a great way to send the senior class off to the real world.

Watch and/or listen below as Diaco, Tommy Hopkins and Max DeLorenzo talk about what it means to become bowl eligible.

The American Athletic Conference announced on Monday that the game between the UConn Huskies football team and Temple Owls at Lincoln Financial Field in Philadelphia, PA will kickoff at 7 p.m. on November 28. The game will be televised on ESPNU.

UConn vs @UHCougarFB will kickoff this Saturday at 3:30 pm and be televised by @ESPNU #work2win — UConn Football (@UConnFootball) November 15, 2015

Royce LaFrance has 10 tackles from a loss including five sacks for the Green Wave. Corey Redwine, Nico Marley and Eric Thomas could also present some trouble.

Watch and/or listen below as UConn football coach Bob Diaco talks about the Tulane’s defensive front:

When you take a look at the national statistics for interceptions, you will find the UConn Huskies football program third with 16 on the season.

They’ve gotten five from Jamar Summers, three from Jhavon Williams and two each from the safeties in Obi Melifonwu and Andrew Adams. They’ve also gotten picks from linebackers Marquise Vann and Junior Joseph.

So what is the reason for all the interceptions?