Not long into his first season at DePaul, head coach Oliver Purnell landed a recruiting coup. The Blue Demons were in shambles, with just one Big East win over the preceeding two seasons (1-35 in 2008-2009 and 2009-2010 combined), plunging attendance and a core of promising but untested freshman. Nevertheless, Purnell nailed down a commitment […]

It has become a regular part of the college basketball season. At the end (or near it) of the NCAA Tournament, the basketball-reading public is treated to write-ups, videos and diatribes outlining the crazy things NCAA game officials go through to earn big money blowing into whistles. Every year it's the same song; Every year […] When Florida Gulf Coast entered Division-I play in men's basketball at the start of the 2007-2008 season, no one could have predicted where the Eagles are today. But four other programs moved to D-I that year, and seven other programs have made the move since then. How do they stack up to FGCU's wanton success? […] If you can't beat 'em, join 'em, right? For my preview I chose to aggregate a variety of data focusing mainly on the Four Factors that determine Ken Pomeroy's projections. I've also been fascinated by a relatively new metric called Survival Analysis that has historically been a better predictor of succer than BPI, RPI and […]

Last year I proved that not all printable brackets are created equal in the inaugural edition of the printable bracket power rankings. But with the spread of things like tablet devices, this internet thing and the Mars Curiosity rover, I figured it surely would be the last. I mean, people still print stuff? Like on […]

The Great West is dead. After four years of men's D-I basketball, all five of its team have found new homes (well, except NJIT, which seems to be in limbo as it continues to lobby for membership in the American East), and now we have an official date and time for the end.  I'm surprised they […] 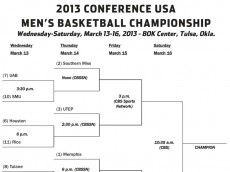 When and where: Wednesday to Saturday at the 17,839-seat BOK Center in Tulsa, Okla. Last year: The CUSA Tournament has become a broken record. Last season top-seeded Memphis cruised to double-digit wins in all three of its games to garner their sixth tournament crown in the last seven seasons. But the Tigers didn't have to […]

Based on data obtained from Sports-Reference.com's excellent college basketball website, we know that 52 currently-active Division-I men's basketball teams have never set foot in the NCAA Tournament. That includes teams from a variety of backgrounds. On one end of the spectrum there's Army, Northwestern and William & Mary, which haven't danced in a combined 327 […] When and where: Saturday to Tuesday at 6,300-seat Sioux Falls Arena, Sioux Falls, South Dakota Last year: Tounament MPV and that-guy-from-South-Dakota-State-that-everyone-talks-about Nate Wolters led the second-seeded Jackrabbits to their first-ever Summit Tournament title in an overtime win against No. 4 Western Illinois, 52-50. And yes, they really were down by 12 points in the second half. […]

Last year: In the first year of the tournament's move to Springfield, fourth-seeded Fairfield made a play to win win it all. The Stags upset top-seeded Iona, which ended up earning the MAAC's first NCAA Tournament at-large bid since 1995, in the semifinals before falling to No. 2 Loyola (MD), 48-44, in the finals […] When and where: Thursday to Sunday at the Scottrade Center in St. Louis Last year: Fourth-seeded Illinois state stormed past top-seeded Wichita State in the semifinals and took No. 2 Creighton to overtime in the championship game before the Blue Jays managed to exclude a third MVC team from snagging a trip to the NCAA […]

Last Year: Third-seeded Detroit, which fell to Valparaiso twice during the regular season, upset the top-seeded Crusaders in their own Athletics-Recreation Center, 70-50. The McCallums were pleased. This Year: History could very well repeat itself as Valparaiso and Detroit return as the top seeds and clear favorites. Last year's No. 2 seed, Cleveland State is clinging […] Yesterday afternoon, the veteran NCAA official that everybody loves to hate, Karl Hess, was in South Bend, IN where he helped call the Cincinnati at Notre Dame game. On Saturday he worked Auburn at Ole Miss; on Thursday it was Georgia at Arkansas; on Wednesday it was Providence at Syracuse; and on Tuesday Hess was […] A lot of head coaches were in new places for a lot of reasons for the 2012-2013 season. In fact, 47 D-I teams were helmed by a new coach to start the season, and I thought a comprehensive check-in was due. There's no hard-and-fast method for assessing the job that a new coach is doing. […]