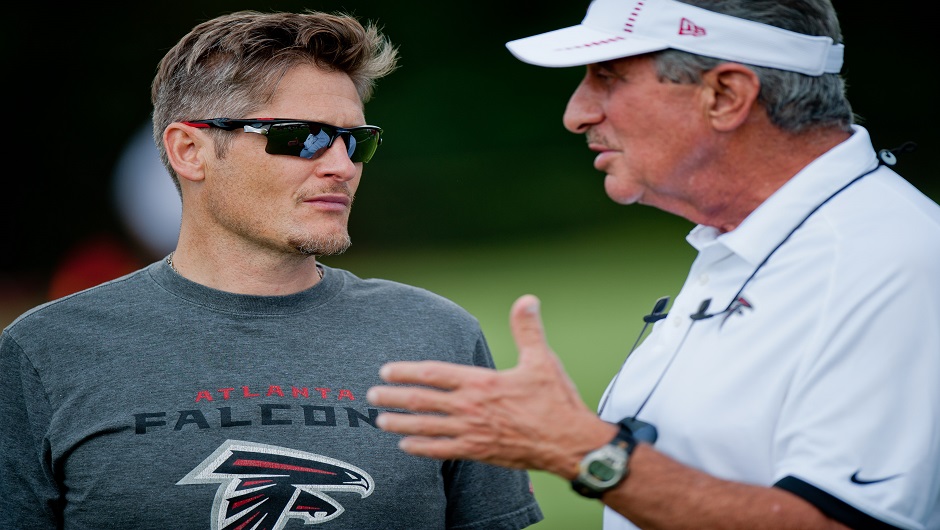 The perfect storm of elements is hitting the NFL community thanks to polarizing views on quarterback prospects. For this draft in particular, many teams can qualify as logical candidates to potentially trade in the early rounds. I am not attempting to predict every trade, but to highlight some teams that are in sensible positions to pull off a deal.

Buffalo Bills (Pick: No. 9)
Potential trade up: Bills swap spots with Texans at No. 1

Rumors emerged in April about Buffalo’s alleged willingness to move up for Jadeveon Clowney. Between Mario Williams and Jerry Hughes off the edge, and Kyle Williams and Marcell Dareus inside, the Bills already produce plenty of pressure with the front-seven so this would only address their greatest strength.

Many view Clowney as a transcendent talent and the past two New York Giants Super Bowl runs prove teams can never draft enough edge-rushing talent. Taking Jason Pierre-Paul in 2010 was adding strength to strength. However, moving from No. 9 into the top five would do so at a great cost for the Bills.

Detroit Lions (Pick: No. 10)
Potential trade up: Lions swap spots with Jags at No. 3 to draft Sammy Watkins

Lions general manager Martin Mayhew is rumored to be very interested in Clemson wide receiver Sammy Watkins, who has little chance of falling out of the top five let alone 10. Golden Tate provides a nice complement to Calvin Johnson but has made his hay on the outside, while injuries to Ryan Broyles and the departure of Nate Burleson have left a need in Detroit for a dangerous slot receiver.

Asked about Watkins specifically, Mayhew recently dodged the question, via The Detroit News: “All the players that are really, really good, I’m enamored with those guys. The ones that aren’t so good, I’m not that enamored with.”

Megatron-Tate-Watkin would arguably boast the most terrifying receiver trio in the league. Add in Reggie Bush, and we’re talking YAC monsters. And if tight end Joseph Fauria continues to develop between the 20s, this arsenal rivals the 2013 Broncos in potential firepower—that is if Matt Stafford returns to his early-2013 form.

Dallas Cowboys (Pick: No. 16)
Potential trade up: Cowboys swap spots with Rams at No. 13

The silly decision to install Monte Kiffin and his Cover-2 played a key role in the Cowboys’ defensive struggles last year. But the personnel undeniably contributed. Dallas didn’t get what it paid for in Brandon Carr and their trade up to draft Morris Claiborne in 2012 is not paying dividends either.

Jerry Jones and Co. could move up round one again to rectify their defensive backfield issues. Depending on how much they give up, this would have merit if directed specifically at the safety position, as the cornerback class should present strong options in round two.

A year after finishing last in total defense and 30th in pass defense, the Cowboys could find sense in moving to the edge of the top 10 to bolster their last line. The best options at the top of this draft are Calvin Pryor and Ha Ha Clinton-Dix, who The Sports Daily’s Ryan Alfieri has going No. 11 to Tennessee. If he drops that far, they may get a call from North Texas.

Philadelphia Eagles (Pick: No. 22)
Potential trade up: Eagles swap with Ravens at No. 17

This is regarded as perhaps the most talented and deepest receiver class in history but that hasn’t stifled reports that Philly could trade up to address the position. Sammy Watkins and Mike Evans possess a strong probability of going in the top seven picks. Though if Evans drops, Eagles fans in Radio City Music Hall will wait with bated breath to see if Howie Roseman cuts a deal to move up 10 or so spots.

DeSean Jackson’s exit means the Eagles must be looking for another game-breaker at receiver. Riley Cooper and Jeremy Maclin can be nice weapons but Philly can’t count on either to consistently torch teams deep or stretch defenses with their mere presence. This must make the rising hype on Tier II of this receiving class particularly nerve-racking for head coach Chip Kelly, with the draft stocks of LSU’s Odell Beckham and Oregon State speedster Brandin Cooks gaining steam.

San Francisco 49ers (Pick: No. 30)
Potential trade up: Niners swap with Dolphins at No. 19

The Niners land on this list due primarily to the wealth of picks they possess and lack of weak spots on the roster, giving them plenty reason to move up for a particular player they happen to be sold on.

San Francisco boasts 11 picks yet the highest one barely lands them in round one. Jumping into the teens could give the Niners a CB1 or slot corner of the future that they very much need after the departures of Tarrell Brown and Carlos Rogers this offseason.

Could QBs be passed on early but start coming off the board quickly late in the first round?

This could set forth a chain-reaction of trading up from the early-second round into late in the first round, where basically every team with a pick in the 20’s is set at quarterback except the aforementioned Browns at No. 26 and perhaps the Bengals at No. 24. Or could the Bengals’ late-emerging interest in Teddy Bridgewater be a ploy to get a nicer deal out of the pick from a QB-desperate franchise? Or the flurry of Johnny Manziel rumors?

There’s also the potential that these teams, namely Minnesota and Houston, could actually trade down to mid-first and take their quarterback, reminiscent of the Ravens trading down from No. 8 and then back up to take Joe Flacco at No. 18 in 2008.

GM Rick Spielman told me Vikings have had trade-down talks with 5 clubs. Said trade up is unlikely, something unexpected wld have to happen.

Rams general manager Les Snead and head coach Jeff Fisher have orchestrated trade-downs in each of the past two years, so this would be business as usual. Pick No. 2 is a hot target for teams reportedly seeking Clowney, Mack, Watkins and Manziel.

Many draft experts are leaving Morgan Moses out of the first round while others are sending him to tackle-needy teams late on Day 1.

Tier I of the offensive tackle class—Greg Robinson, Jake Matthews and Taylor Lewan—will probably leave in the top 10 or 15, so Baltimore could probably trade down and still attack Tier II in the 20’s.

Thomas Dimitroff has made a name for himself in dealing up for the likes of Julio Jones. This mentality has left the cupboard bare at many positions and really exposed Atlanta last season when Jones hit the sidelines early.

Trading down for additional picks could help the Falcons address their plethora of needs while still grabbing a quality edge rusher in the first.

However, I doubt the Falcons go with Lewan due to his off field situations.I think they either trade up to 1, or trade down to 10 & go Barr

No matter what happens, analysts like Scott Kacsmar think the events taking place during the draft will be extremely up in the air. There’s a lot of uncertainty abound.

I’ve never seen a first round of the NFL draft where things were this unpredictable the day before it.

Merry freelancer. NFL Lead Writer at The Sports Daily, Contributor to Sporting News. May have also seen my work at USA Today, Bleacher Report, Pro Football Focus and the late AOL FanHouse. VT grad. I am also an avid diabetic.