Here’s how the playoffs stacks up right now: 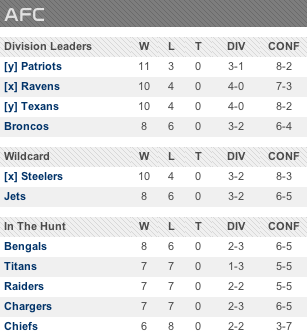 The way I see the playoffs shaping up, there’s only three playoff spots that can still be considered up for grabs. The Steelers have locked up a spot for themselves in the AFC, and it would seem as if the Falcons and the Lions have done enough to claim the two NFC wildcard positions. The positions that are still wide open are the AFC West divisional winner, the NFC East divisional winner, and the 6 seed in the AFC.

The Bengals are really kicking themselves for losing to the Texans right about now. That game may come back to haunt them, but I think they’ll find a way to win their last two games and sneak into the playoffs. Their biggest hurdle is a huge matchup that’s looming between them and the Baltimore Ravens. If the Ravens have one of their off games, the Bengals should have no problem outlasting the Jets.

The Giants are now in a must win game this weekend against the Jets. The Giants trail the Cowboys by a game, and that’s the farthest they can fall while still controlling their own destiny. If they beat the Jets, it ensures a winner-take-all scenario in week 17 in what would be the de-facto NFC East championship game.

The Giants are better built to wreak havoc in the playoffs, but they just aren’t playing well right now. The Cowboys have been known for late season collapses. The Cowboys can clinch the division with a win, but a loss wouldn’t derail their playoff chances altogether. At this point, everyone (except Dallas fans) want to see the week 17 matchup with the Giants to be for all the marbles, including yours truly.

The final playoff spot that’s still up for grabs is currently held by the Denver Broncos as the AFC West leader. The Raiders have completely blown a golden opportunity to win the division, and to the credit of the Broncos, they’ve been playing excellent defense to get back to a playoff position.

While there are a whole mess of teams in the NFC clinging to hope at 7-7, they’re all effectively out. That being said, the Falcons and the Lions have both shown big problems with inconsistency this season. It wouldn’t be unheard of for one of those teams to lose out and another team to slip in. The most likely scenario for that happening would be if the Giants win the NFC East, and the Cowboys finish at 9-7. Still, don’t count the Seahawks or the Cardinals out just yet. They’re both dangerous teams that want to end the season on a high note, and they’re both on a roll.