Based on the fact that we now have what appears to be a full-blown officiating controversy in the NFL, we sure picked a good year to starting documenting all of the stupid things that take place in the world of professional football. Week 14 didn't disappoint. Or did it? I guess it depends on whether […]

We should have seen it coming the moment word came from Al Michaels that the start of Thursday's prime-time NFL regular-season opener would be delayed due to severe thunderstorms that didn't seem to be present in the Denver area. It was the second 30-plus-minute delay in as many major NFL games. The first one, also […] James Harrison is one of the most feared defensive players in the NFL. He consistently levels ball carriers, often resulting in fines levied by the NFL. He's a great 3-4 linebacker that demands top dollar for his services. The problem is, no one is willing to pay him. According to Peter King of Sports Illustrated, […]

The New England Patriots are one victory away from going to their sixth Super Bowl in the 12-year period since Tom Brady became the starting quarterback. But standing in the way is one of the Pats' biggest rivals in Baltimore. Here's our first stats-based look at the matchup between the Ravens and Patriots.  * The […]

Both top seeds moved on in the NFC playoffs this weekend, setting up a matchup between the San Francisco 49ers and the Atlanta Falcons in Atlanta Sunday. Some need-to-know facts: * Neither team has gotten to the Super Bowl this century. The Niners were last in the game when they beat beat San Diego in […] So Wade Phillips thinks J.J. Watt had the best season a defensive lineman's ever had, but Phillips is Watt's defensive coordinator, and thus might be apt to bias. However, the numbers indicate Phillips could be on to something, and the eyeball test certainly doesn't lie regarding Watt's dominance as a defender.  This season in Houston, […] 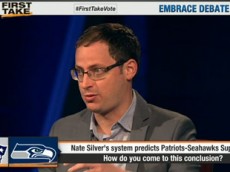 For years, stats geeks and old-schoolers have been fighting over the importance numbers and trends possess when it comes to predicting future outcomes. The champion of the stats side of that argument is Nate Silver, who comes from the world of sabermetrics and who also happened to use his advanced system to predict the winner […]

It's been over 48 hours since Robert Griffin III aggravated his injured right knee in a playoff loss to the Seattle Seahawks, and we still had no true clarity on what RG3's was in for as the offseason got underway in Washington.  It seems that has finally changed. A report late Tuesday night from ESPN's […] The Arizona Cardinals today fired the two men behind the franchise's only Super Bowl trip, general manager Rod Graves and head coach Ken Whisenhunt. Both men had held their respective positions since 2007. Whisenhunt arrived from Pittsburgh as an offensive-minded coach commanded with coaching up second-year quarterback Matt Leinart. His fate was decided, though, […] After ten years, it's time for change in San Diego as team president Dean Spanos fired longtime general manager A.J. Smith after a disappointing 7-9 season. Joining him in the unemployment line is head coach Norv Turner. Summing up the A.J. Smith era in San Diego is hard. After succeeding to the top job […] Expected to be a serious contender for the AFC West title in 2012, the Kansas City Chiefs instead finished with the worst record in the NFL, and it cost head coach Romeo Crennel his job. Crennel's second stint as a head coach began as a promotion from defensive coordinator after Todd Haley was fired with three […] The Cleveland Browns finally made official on Monday what was reported on Saturday and widely reckoned to be coming for months, firing head coach Pat Shurmur and general manager Tom Heckert. Heckert spent almost three years as the general manger after coming over from Philadelphia. His most notable moves including trading up to take […] The hits keep on coming: Chan Gailey has been fired by the Buffalo Bills. Gailey, hired by the Bills before the 2010 season, hadn't been a head coach in the league since 1999 with the Cowboys and had a 16-32 record in three seasons with Buffalo. The Bills haven't made the playoffs since 1999, the […] The Philadelphia Eagles fired Andy Reid on Monday, finally putting an end to speculation surrounding the team's coach for the last 14 years. Reid exits the franchise with twice as many wins as any other coach in Eagles history, and just three seasons with a record under .500. Unfortunately for Reid, the Eagles struggled in […] 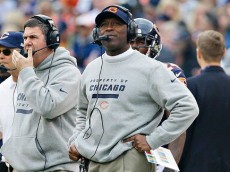 Likely the biggest surprise of the day, Lovie Smith has been fired as head coach of the Chicago Bears according to a report by Ian Rapoport, citing a source close to the situation. The firing is surprising to many, but not altogether unforeseen. It was apparent down the stretch that the Bears coach was coming […]