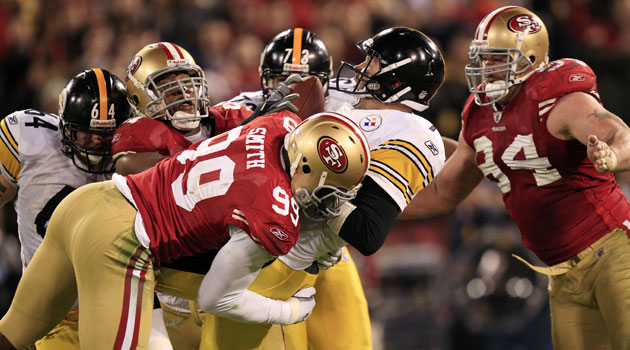 For as much as the 2011 NFL Draft will be remembered as the year of the quarterback, the defensive rookies are the ones making the most noise this season. Outside of Cam Newton of course.

Cam Newton, Jake Locker and Blaine Gabbert got all the press on draft day. Once the season started, Newton’s playmaking theatrics stole headlines, while Andy Dalton and AJ Green brought Cincinnati back to surprising levels of respectability, and Julio Jones has emerged late as a difference-maker in Atlanta.

However, while most of those offensive rookies will be on the sidelines once the regular season ends, another trio taken in the first 11 picks — Aldon Smith, Von Miller and J.J. Watt — will be playing well into the New Year. Here’s a profile of the three players, and the impact each has had in leading their teams into the postseason.

Stats from ProFootballFocus.com, through Week 15.

Smith has the San Francisco 49ers as the potential #2 seed in the NFC, Miller has the Denver Broncos in position to clinch the AFC West and Watt is playing a big role for the Houston Texans who won the AFC South and are in the playoffs for the first time in franchise history.

Monday night against the Pittsburgh Steelers was Aldon Smith’s coming out party. He racked up seven quarterback hits, a staggering single-game number that is arguably more impressive than the 2½ sacks he recorded during the 49ers’ 20-3 victory Monday night. To quote the late great Biggie Smalls: if you don’t know; now you know…

Smith, the seventh player chosen in the 2011 NFL draft, put the hurt on Pittsburgh’s Ben Roethlisberger. He now has more sacks (13) than all but one rookie since 1982, according to ESPN Stats & Information. Jevon Kearse had 14½ for the Tennessee Titans during their 1999 Super Bowl season. Smith has a good shot at breaking that record over the final two regular-season games. The 49ers face Seattle and St. Louis, teams that rank among the six worst in most sacks taken per pass play.

It’s something to ponder, but could Smith have challenged Miller for Defensive Rookie Of The Year honors if he was a player with an every-down role? Or have the 49ers maximized his potential by limiting him to nickel situations and not putting him in bad spots (against the run) where he might struggle? Even in limited snaps, he’s still earned the second-highest ranking for all 3-4 OLBs from Pro Football Focus, on his way to picking up stats that do justice to his performance.

Miller, the No. 2 talent in last year’s draft by any definition, is a difference-maker with 11½ sacks, right behind Smith in the rookie rankings. Three more and he like Aldon Smith will tie Jevon Kearse for the rookie sacks record. However, Miller is much more than a one-trick pony, playing nearly every down on defense and handling run-stopping and pass coverage duties with equal aplomb. Together with pass-rush demon Elvis Dumervil, Miller has led the Broncos’ defense back to respectability.

The young Bronco has the look of a Pro Bowler for years to come, and is currently leading Smith for the Defensive Rookie of the Year award. In fact, the fellows at PFF want you to consider Von Miller for Defensive Player of the Year, rookie or not.

Miller had a rare poor outing against a Patriots offensive line last week, which neutralized him with sound blitz pickups and quick throws. But I would bet you won’t see many games in his career where he fails to register any pressure. Given how good he’s been prior to Week 15, he’s still miles ahead of the competition.

If not for the Miller and Broncos’ stingy defense that’s finally jelling under Dennis Allen, the team’s sixth defensive coordinator in as many seasons, all those fourth-quarter comebacks engineered by Tebow wouldn’t have been possible.

While Smith and Miller are the flash of the group and putting up the sexy numbers, do not discredit what J.J. Watt is doing down in Houston. Watt has turned in a strong campaign to this point, playing defensive end in Wade Phillips’ 3-4 defense.

What many fail to realize is when playing as a 3-4 end you are asked to split double teams on nearly every snap. This makes you much less likely (unless you’re Justin Smith) to have the kind of stats that jump off the page. That said, Watt, who is fifth ProFootballFocus.com’s 3-4 end rankings, has picked-up an impressive 37 combined sacks, hits, and hurries, and is second only to the Arizona Cardinals’ Calais Campbell in terms of defensive stops at the position.

With the loss or Mario Williams, Watt has stepped up big for a rookie. Watt has turned in a strong campaign and his 55 tackles and 5.5 sacks, after last night’s game, place him in the top 10 among rookies in both categories. Somewhat quietly, he has become a major contributor on one of the NFL’s best defenses.

From the looks of it, these three rookies are adding credence to the old adage: offense wins games, but defense wins championships.