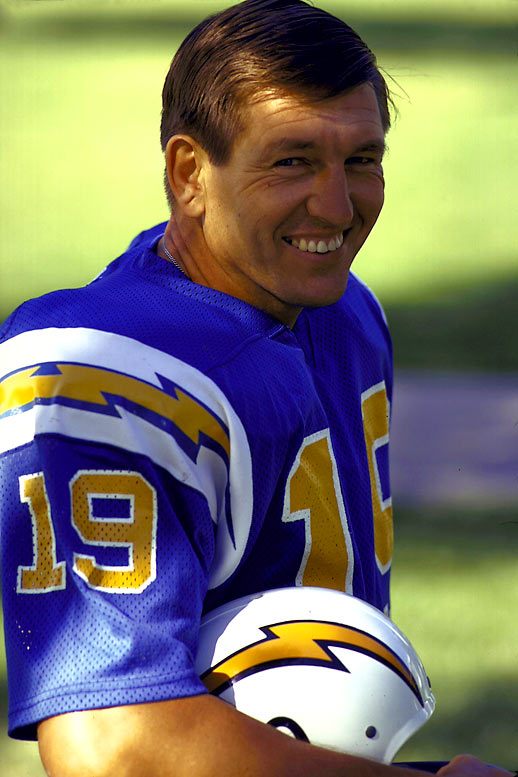 Peyton Manning prepares to seek a new home via free agency (hello, South Beach) after amassing a hall-of-fame career and missing the entire 2011 season to spinal problem. In doing so, he joins a trio of generation-defining quarterbacks who simply couldn’t stop playing, even if they had to stop playing for their own team.

“Mr. Colt.” The man who became the first great quarterback of the modern passing era. His career spanned 18 years, but that was at least three too many. The tail end of his time in Baltimore was painful to watch, as from age 35 on he started only 35 of 70 games, winning 21 of them. To his credit, he had a Favre-like miracle year in 1970 when he led the Colts back to the Super Bowl — what turned out to be the un-Superest Super Bowl of all time — despite completing only 51% of his passes and throwing more interceptions than touchdowns.

That was his age 37 season. At age 40, though, he was still willing to put himself out there, even though Baltimore was ready to cut the cord. So he went and replaced John Hadl on a four-win San Diego team… and somehow made them worse. The Chargers won only one of his four starts in a 2-12 season, while Hadl uncorked a miracle 12-2 season in Los Angeles at age 33.

However, before departing, Unitas passed the torch to a promising young rookie in San Diego named Dan Fouts. 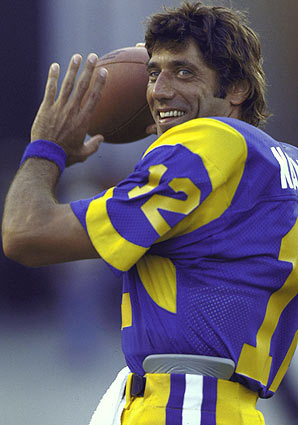 By the latter part of his career, Broadway Joe was more known for his antics in the spotlight than by anything he could do on the field.

Even at the peak of his career in New York, Hollywood had its hooks in him. In 1970, two years removed from his Super Bowl glory, he starred as C.C. Ryder in a feature film (dramatic scene: Joe Namath eats a sandwich) alongside Ann Margaret, and co-starred with Glen Campbell in another feature. The fact that he started only eight games over the next two seasons (winning only three) was an afterthought.

The Jets stuck with their iconic quarterback for another five seasons before finally giving up. But Namath, ever eager for a stage and a paycheck, was more than happy to play for the LA Rams. They had a mess at quarterback the year prior, with three starters (including a young Ron Jaworski) trading ineffectual starts.

Namath came in and immediately put things to rights, leading the Rams to two wins in their first three games. However, a matchup with the Chicago Bears on Monday Night in his fourth game provided a full career’s worth of punishment, prompting Namath to quit for good while he still had his looks. 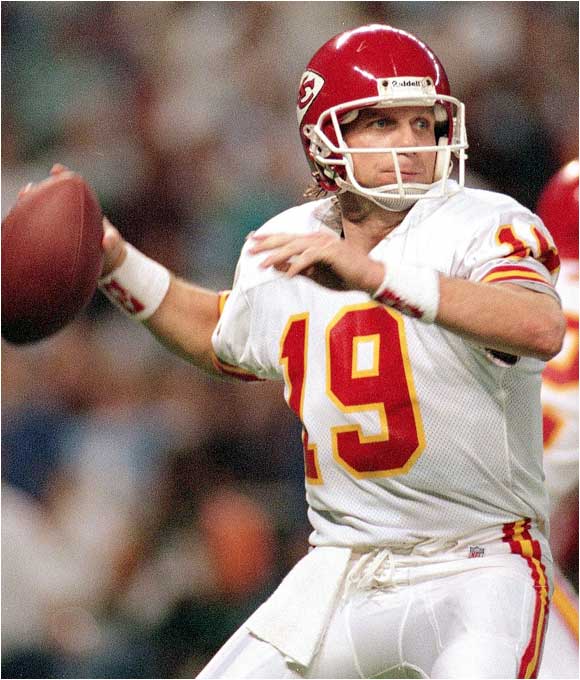 Joe Montana was arguably the greatest quarterback in a great generation of quarterbacks: smooth, cunning and deadly efficient. He and coach Bill Walsh, inventor of the West Coast Offense, turned the 49ers into a dynastic force.

Walsh’s offense essentially did away with quarterback protection, relying on the quarterback to protect himself with quick reads and quick throws. But those throws aren’t always quick enough, and the punishment that Montana accumulated ended up knocking him out of the game for almost all of 1991-92 with severe concussions. Montana became one of the first football players to raise awareness of these mysterious brain injuries… but it didn’t stop him from wanting more.

In 1993, the 49ers had already found Montana’s capable replacement (and won another Super Bowl) with Steve Young, and were not interested in bringing the legend back home. So they traded his services to Kansas City, and led the woeful Chiefs back into the playoffs in each of the next two seasons, winning 17 of 25 starts and throwing 29 touchdowns along the way.

However, while he was still capable of playing at or near the top of his game at age 37, so were the opposing defenses. After two more years of punishment, unrewarded by the ultimate prize, Montana called it quits for good.

Of these three players, Manning’s circumstances are probably closest to Montana’s. And there are always quarterback-starved teams that believe that 80% of an aging superstar is better than 100% of what they’ve got now. But the past exploits of aging superstars might make fans of those teams stop and think twice.