The 49ers played their first regular-season game in Levi’s Stadium this past Sunday Night. Friend of the site and long time season ticket holder, Scott Porter, provides us with a great review of the stadium and how it compares to Candlestick.

Being a 49ers season ticket holder at Candlestick for the past 10 years, and having gone to 49ers and Giants games since the early 80s I was very interested to see how the official opening of the 49ers stadium would play out.  Everyone has heard to this point about how it was going to be the most ‘technologically advanced’ stadium in the league, but how does that help the game day experience be a ‘better one’? And how does that compare to concrete jungle known as Candlestick? 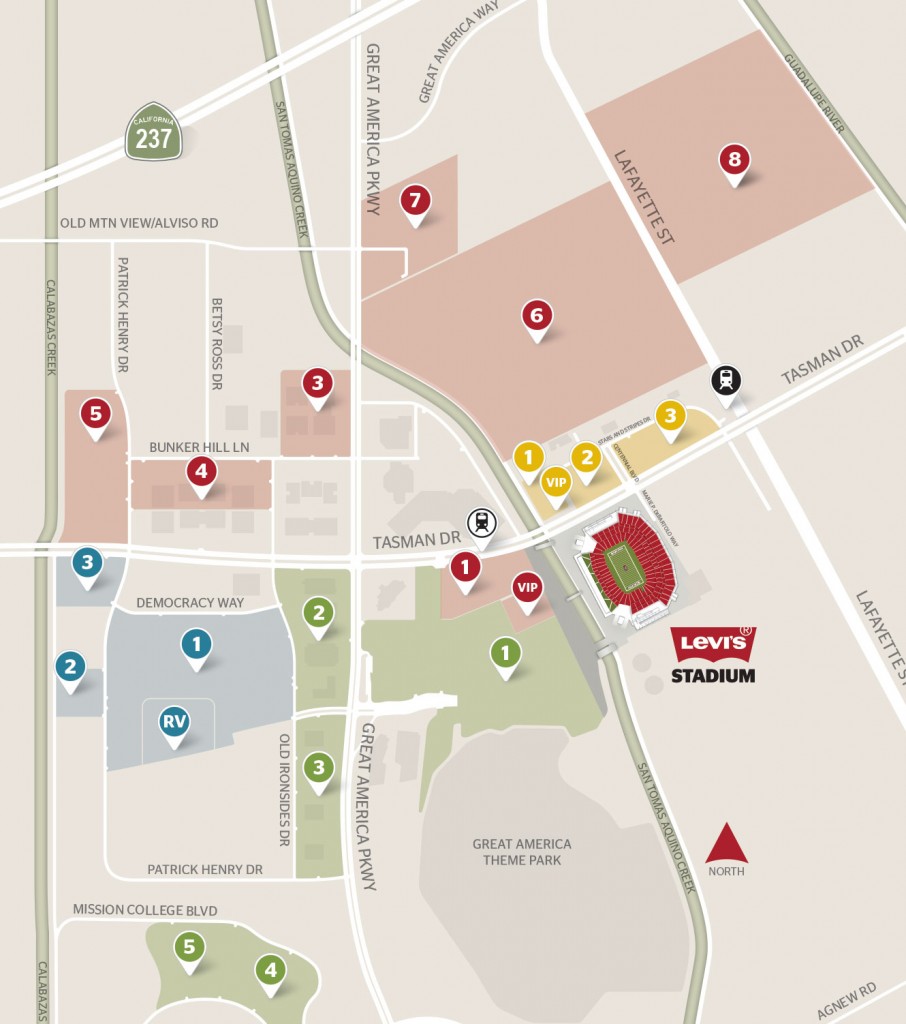 I did go to the first preseason game against the Denver Broncos, so the ‘home opener’ in Week 1 wasn’t my first experience inside the stadium.  From that game, I remember the stadium being very impressive, but ultimately the lasting memory was the fact that the team didn’t score any points, the terrible traffic getting out of the parking lots and the well documented issues with the turf which was ultimately replaced.

During the dark years of the 49ers (2003-2010) the best part of the game was actually the tailgate. What is a tailgate without firing up the bbq and grubbing on some sausages, philly cheese steak sando’s or tri-tip?  At Candlestick there was only one main lot to choose from, while at the new stadium there are nine different lots scattered within a 1 mile radius.  When it came to purchasing a parking pass there was only one real decision to be made and that was whether you wanted to be able to bbq or not (i.e. have the ability to have an ‘open flame’).  Obviously from our past experience there was only one choice and that was to be able to bbq and that led us to Blue Lot 1.  This lot is a much longer walk to the stadium, a good 15-20 minutes (compared to the five or so minutes in the Candlestick parking lot), but the crowd in this lot was just as lively as at Candlestick.  Loud tunes, football tossing, drinking games, satellite TV’s setup with the games of the day, elaborate bbq and beer bong set ups, etc… good stuff. My one ultimate take away from this lot was that it was much more difficult to access, and also to leave. Blue Lot 1 is one major mess, with not enough lanes/entrances to get into the lot and not enough lanes/exits to get out of the lot. All in all my crew made the smart choice of parking as close to the exits a possible, which did save us a ton of time getting out of there, but for some it took two-to-three hours to leave! That is unacceptable. 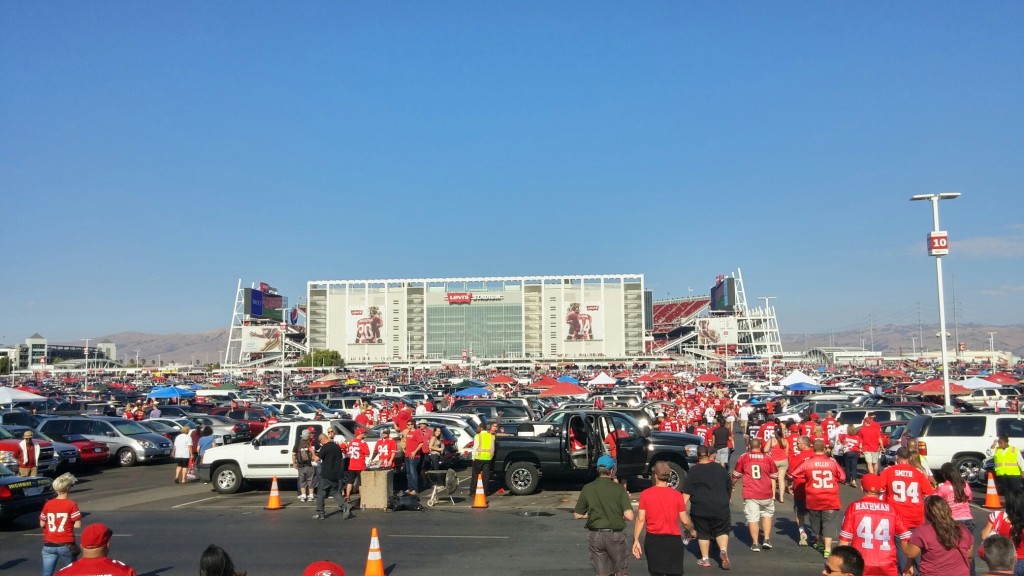 View from one of the closer parking lots

On to the stadium, it was incredibly easy to get into the stadium, MUCH EASIER than Candlestick. With a sold out crowd we were able to casually walk to the west side of the stadium, and get through the short security line and have our tickets scanned in no time at all. Everything was done via the Levi’s Stadium app, where you can get in by scanning your QR code. It was a breeze. 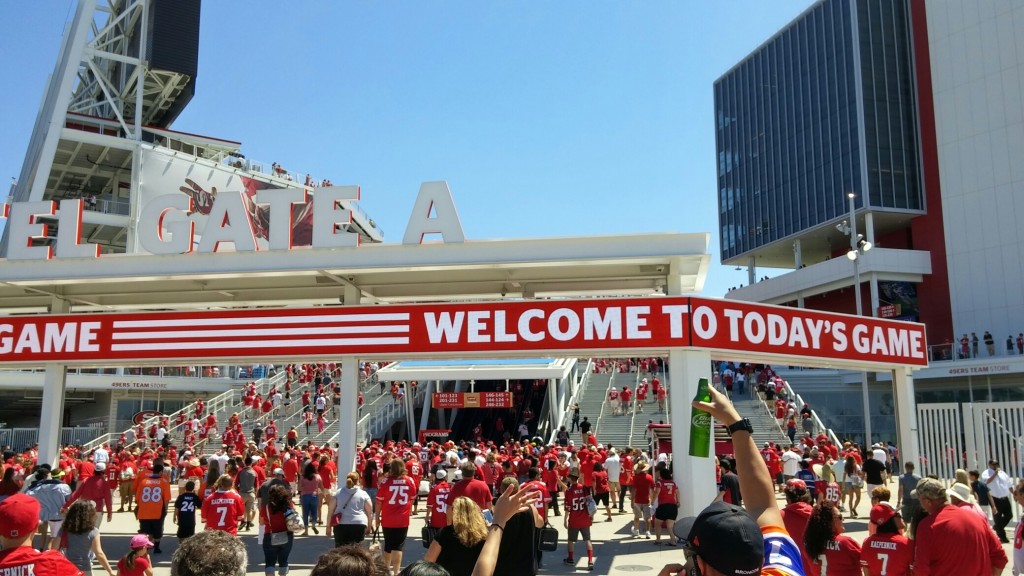 A quick item about the ‘Levi’s Stadium’ app: it is a must-have for any fan. You can use this app to get in as your ticket (no reaching into your wallet to grab a crumpled up ticket), you can also use this for purchasing paper-less parking passes as well.  You can also transfer tickets and parking passes via the app. You can search for the shortest food/beverage lines throughout the stadium, order and pay for food ahead of time and pick it up at an Express Lane, and even have food/drinks delivered to your seats for a $5 charge.  We saw deliveries of beer, food and then in one instance peanut M&M’s directly to their seats. Technology rules! 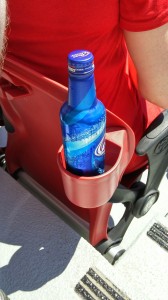 Once at the seats the first major improvement we noticed was……..wait for it…..cup holders!  This was a significant drawback at Candlestick.  I can’t tell you how many beers had seen their ultimate demise as fans walked in and out of the aisle and kicked them over. Nothing is worse than having something that you just paid $10+ for literally go down the steps. The next thing I noticed was the temperature in the stadium. Inside and around the stadium had to be a good 10-20 degrees warmer than at Candlestick.  Granted this is the first game in September, but I remember many times the fog rolling over the upper bowl of Candlestick (insert coldest winter I ever spent was a summer in San Francisco joke here). Now instead of packing an extra coat to 49er games, we will be bringing extra sunscreen and a hat. During the game, the very large scoreboard and replay screen was a huge improvement. The sound system was definitely ‘off’ with a slight delay that was annoying after only a couple plays, but you would think that is just part of the growing pains they will get resolved. The field was well lit, with no shadows on the field, making it very easy to see all the plays. 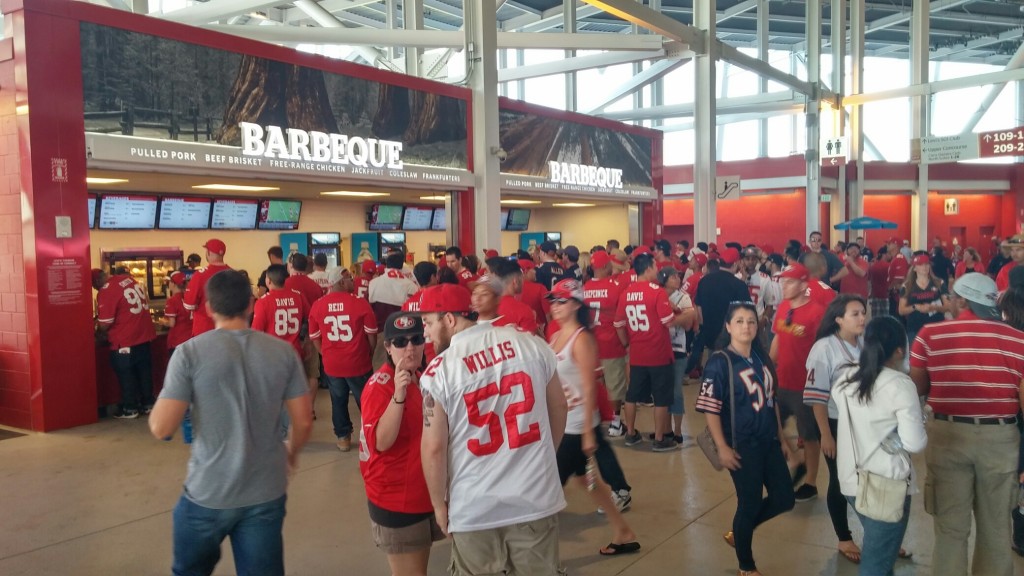 While taking a stroll around the lower bowl at halftime, all of the concessions were on the ‘inner ring’ and was where most of the foot traffic was. Here you could also watch the game and not miss a play on one of the many HDTV’s around the park. You can also walk to up to the standing room only area and catch some of the game easily. The additional ‘outer ring’ on the lower bowl made it incredibly easy to make it around the stadium.

There are a ton of bathrooms at the stadium, and in each bathroom there are actually urinals, versus troughs at Candlestick. Even in a sold out home opener there was barely any line in the bathroom. I can’t quantify how much better the bathrooms are in Levi’s Stadium than Candlestick. 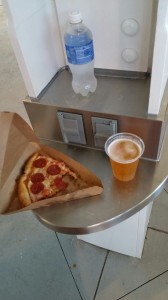 Food and drink prices are ridiculous in the stadium, but they are about the same as Candlestick. It was $10.50 for a 16 oz domestic beer and $12-14 for a ‘premium beer’. There were tons more options for food than at Candlestick. They had the regular pizza, pretzel, and hot dogs, but there were other options including fancy stuff like Tortas, Gluten-free food and Steamed Buns (seriously why not just call them hot dogs?). I didn’t see very many ATM’s at the stadium, so make sure to bring cash with you if you want to use the beer only vendors. These lines were always much shorter than the lines for food, but they only take cash.  There were plenty of places to be able to set your eat and drink, along with spots for you to charge your cell phone (because this is the most technologically advanced stadium).

Roaming the second deck there is the Bud Light Patio and Pepsi Patio on either side of the stadium with plenty of food and drink options along with a picnic table kind of atmosphere. I don’t know how packed these areas are during the game, but during halftime fans flocked to these destinations. Other areas I have yet to visit are the Hall of Fame (which I have been told is really cool, especially for the 49ers Faithful), the entire West Wing of the stadium which includes the Yahoo Fantasy Football area, fancy bars and restaurants. I haven’t been in a Sky Box but from what I have seen on TV and heard, they are impressive. 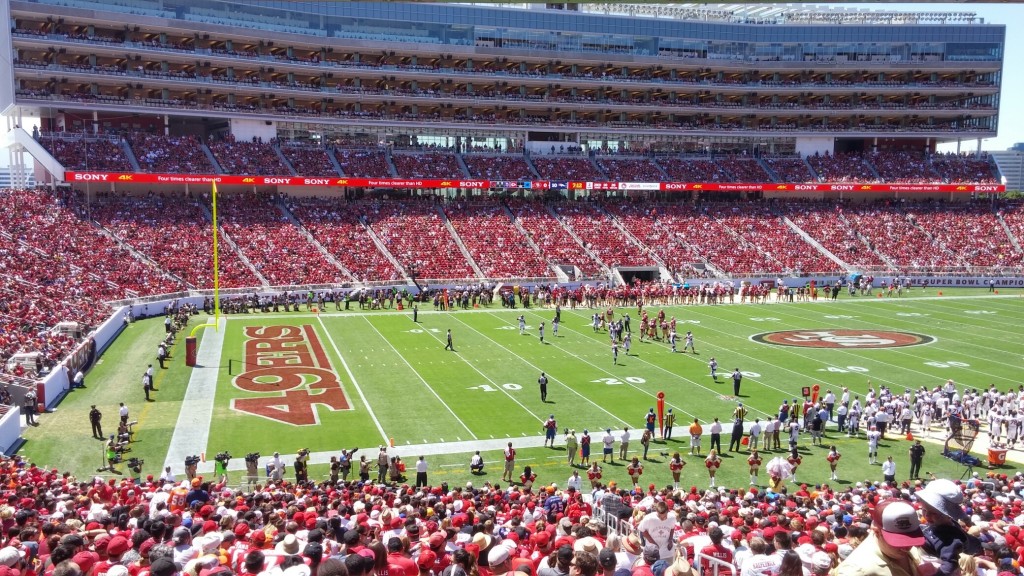 All in all, Levi’s Stadium is an incredible upgrade on game days. The Candlestick fan might have been priced out of the new stadium and replaced with the ‘White Wine Sipper’ crowd, but the stadium itself is impressive. My crew and I will miss the concrete jungle known as Candlestick, and we will always remember all the great memories of the 49ers players and games, along with the priceless tailgates of the past. But Levi’s Stadium is truly an enormous upgrade. Now all they need to do is figure out the terrible traffic situation, especially in Blue Lot 1 (if you are reading, Jed York).