Sunday in Baltimore, Case Keenum will start in Baltimore for the St. Louis Rams. That’s because Nick Foles — who just two years ago posted the best touchdown-to-interception ratio and the third-best passer rating in NFL history while also leading the league with a 9.1 yards-per-attempt average — has been benched.

How is it possible that in 13 games in 2013 Foles was statistically the best quarterback in football and has been mediocre at every other point? It’s an enigma that might go down as the ultimate example of why small sample sizes can’t be trusted in professional football.

Last year, Foles was the league’s seventh lowest-rated qualified passer, and he ranked 30th among 33 qualifiers before being sent to the bench by Jeff Fisher this season. In fact, he was similarly ineffective prior to his standout season, posting a measly 79.1 passer rating in seven appearances (six starts) as a rookie with the Philadelphia Eagles in 2012. 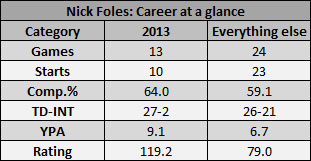 My best guess? Foles was in the right place at the right time when opposing defenses still weren’t completely aware of what exactly new Eagles head coach and offensive mastermind Chip Kelly was bringing to the table. With Philly’s running game on fire during an incredible season from LeSean McCoy and defenses guessing with Kelly, Foles was able to benefit from playing behind a stacked offensive line while throwing to guys like DeSean Jackson and Riley Cooper.

But then that line lost some luster, defenses figured Kelly out, Jackson was traded and McCoy’s play dropped off. And suddenly Foles’ flaws were exposed. And yet the Rams were silly enough to trade for him anyway and give him a three-year, $27 million contract.