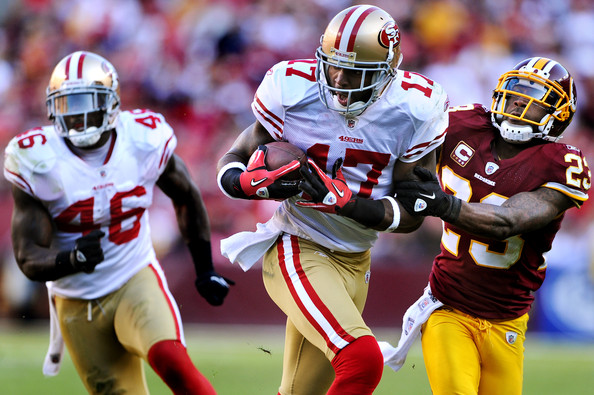 NFL GM’s were still in the giving mood a couple of days after Christmas it appears. Giving out two pink slips today. Those on the receiving end were San Francisco 49ers WR Braylon Edwards and Washington Redskins RB Ryan Torain.

Struggling wide receiver Braylon Edwards was released by the San Francisco 49ers following surgery on his right knee earlier this season that limited him.

Edwards tweeted the news Tuesday, attributing the move to his injury, which “required more time to rehab and hasn’t allowed me to re-sync with the offense”

Edwards had 15 catches for 181 yards and no touchdowns in eight games with five starts for the NFC West champion 49ers (12-3) after receiving a $3.5 million, one-year contract in August. That gave him a fresh start under coach and fellow Michigan man Jim Harbaugh.

Edwards spent the first five seasons of his NFL career with the Browns, making the Pro Bowl in 2007, before playing the past two with the New York Jets. He also had a series of legal run-ins along the way.

As for Ryan Torain he was released by the Washington Redskins after starting in four games this season, Torain fell behind rookies Roy Helu and Evan Royster on the depth chart.

Torain rushed for only 200 yards this year, with 135 coming in the win over the St. Louis Rams on Oct. 2. He then struggled when given a shot at the starting job after Tim Hightower was lost for the season with a knee injury, leading to the emergence of the rookies.

Torain rushed for 742 yards for the Redskins last year.