On Monday Night Football, Drew Brees broke Dan Marino’s 27 year old record for most passing yards in a season with an extra game to spare.  If Brees plays the distance against Carolina on Sunday, he’ll end up shattering Marino’s previous mark of 5,084.  Even though passing numbers have been going through the roof this season, it shouldn’t diminish what Brees has accomplished this year.  Brees’ 339.1 yards per game is 110.3 yards above the 2011 average (228.8) whereas Marino’s 1984 season (317.8 YPG) was 111.9 yards above the 1984 average of 205.9 yards per game.  Incredibly, Brees is also set to break records for completions and completion percentage (breaking his own mark) in a single year.

The record breaking year by Drew Brees got me thinking… which NFL records are most likely to never be broken?  With offensive numbers always increasing, is any record safe?  The answer is unequivocally yes.  In honor of the Saints #9, here are 9 unbreakable NFL records… 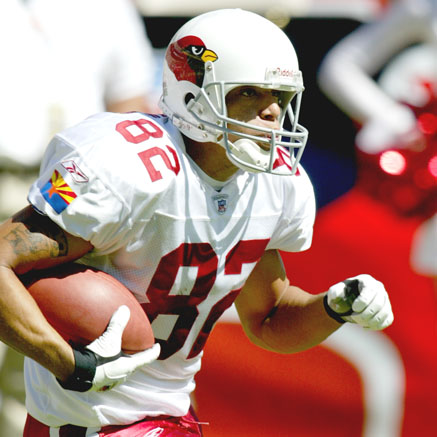 This record looks safe as long as the NFL’s focus on kickoff returns is player safety.  With the kickoff moved from the 30 to the 35, kick returns are at dizzying lows of 2.7 returns per game across the league.  Atlanta has returned a total of 24 kickoffs in 15 games!  Through 16 games this year, Brandon Banks of the Washington Redskins is the NFL leader with only 49.  Last year, Marc Mariani’s 60 kickoff returns for the Titans was the lowest total since 1993.  As long as kickoffs are from the 35 and kickers are averaging more touchbacks than ever before, MarTay Jenkins’ record of 82 kickoff returns will be untouchable.

The 1934 Chicago Cardinals were an interesting team.  They improved from 1-9-1 the previous season in 1933 to a 5-6 record in 1934, good enough for 4th in the NFL’s Western Division.  Nine of their eleven games involved shutouts.  But the Cards hadn’t quite mastered the forward pass.  You see, back in 1934, the quarterback position wasn’t as fully developed as it is today.  Teams averaged a whopping 59.3 passing yards per game and Arnie Herber of the Packers led the league with 799 passing yards.  Frank Greene and Phil Sarboe (whose name is infamously misspelled on the above card) led the Cardinals with 71 passing yards and eight players threw a pass that season.

A lot has changed about the NFL since 1934.  In 2011, quarterbacks threw for more than 302 yards 107 times.  This record for fewest passing yards in a season should be relatively safe. 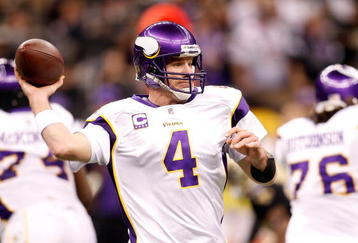 Although it pains me to give the most infamous sexter and greatest flip-flopper in NFL history any credit for his on-field accomplishments, he has a few records that will likely not be surpassed.  The most famous of those records are his 297 straight starts at quarterback.  Peyton Manning had an outside shot at the record, but his march was halted at 208 due to his neck injury.  The next closest ironman is Eli Manning at 118 starts.  To put Favre’s record in perspective, Eli would have to start every game for the Giants until the 2022 season to break the record.  Ain’t gonna happen.

Hall of Famer and owner of the greatest nickname in the history of professional sports, Dick “Night Train” Lane, holds the NFL record for most interceptions in a season at 14.  Even more incredible was the fact that the fearsome Lane set this record as a rookie in 1952 and he did it in only 12 games!  For almost 60 years this record has stood and no player has had more than 10 interceptions in a season since Everson Walls in 1981.  A player would have to average nearly an interception a game to break Lane’s record.  Offenses these days are sophisticated enough to throw away from the best defensive backs, so this record will stand for a long time to come. 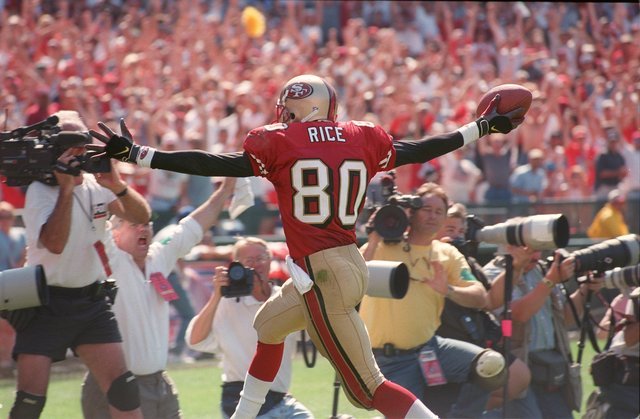 Even though passing is becoming more prominent in the league, the greatest receiver of all-time is high above the rest of the field for career receiving touchdowns.  Jerry Rice is 44 touchdowns above the next closest all-time (Terrell Owens and Randy Moss) and an incredible 102 touchdowns ahead of the highest active player, Tony Gonzalez.  Rice led the NFL in receiving touchdowns six out of eight years from 1986-1993 and surpassed 10 touchdowns in a season 9 times.  The receiver with the best chance to catch Rice is perhaps Calvin Johnson of the Lions.  He would have to average 15 touchdowns a season for the next decade to catch Rice.  A 15 TD season has only happened 29 times in NFL history. 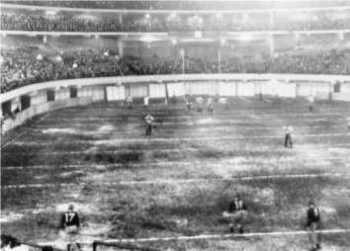 There are plenty of famous defenses throughout the course of NFL history from the Steel Curtain to the ’85 Bears and the Ravens of Ray Lewis.  However, no defense has ever been as successful in keeping opponents off the scoreboard as the 1932 Chicago Bears.  Even though they featured Hall of Fame running backs Red Grange and Bronko Nagurski, it was the defense that carried them throughout the 1932 season.  The Bears started the year by scoring 2 points in their first four games, but only recorded one loss thanks to three 0-0 ties.  The Bears finished the season with a 6-1 record, tied with the Portsmouth Spartans at the top of the NFL standings as ties didn’t count towards overall record.  The Bears recorded a total of seven shutouts in the 1932 regular season including four in their last five games.

After the 1932 season, the first ever playoff game was played in Chicago Stadium between the Bears and the Spartans because the two teams had tied in their two meetings during the regular season.  The game had to be moved indoors from Wrigley Field due to blizzards in Chicago and it’s also believed to be the first major indoor football game ever played.  Fittingly, the Bears shutout the Spartans winning 9-0 on a Nagurski to Grange touchdown in the 4th quarter.  The 1932 playoff game will be forever remembered for launching the NFL into a new era with rule changes including hashmarks and more relaxed rules regarding the forward pass.  Due to the success of the 1932 game, the NFL Championship Game was also introduced the next year.  But history will also remember the 1932 Bears for allowing an incredible 3.14 points per game! 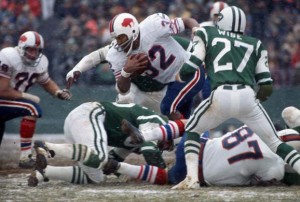 It’s almost impossible to remember, but O.J. Simpson was once one of the great players in the NFL.  O.J. Simpson’s 1973 season may be the greatest from a running back in NFL history.  The Juice ran for 2,003 yards in 1973 becoming the first runner to break the 2,000 yard barrier.  Simpson did this in only 14 games and his record of 143.1 yards per game still stands even though other runners have passed his single season total.  Simpson broke 100 yards eleven times in 1973, broke 150 yards six times, and 200 yards an incredible three times including in back to back games to end the season.

In his 2,000 yard season, Chris Johnson averaged 125.4 yards per game and only Jim Brown, Walter Payton, and Eric Dickerson have also eclipsed 130 yards per game in a given season.  Maurice Jones-Drew leads the league this season at only 95.8 yards per game.  This year, runners reached 143 yards in a game only 21 times.  With teams going to a running back by committee approach, Simpson’s mark seems unreachable. 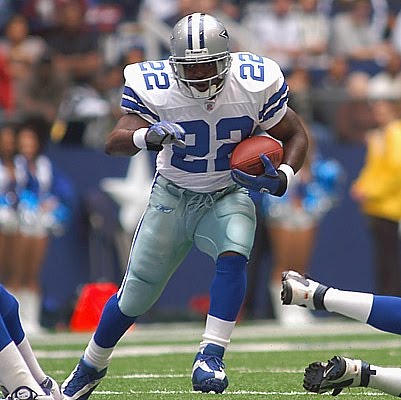 In the same vein, with the way the running back position has been evolving, it will be impossible for a runner to reach the career attempts total of all-time leading rusher Emmitt Smith.  Although it sounds strange to say for someone that retired only seven years ago, Smith is a product of a different era.  Backs just don’t have the same longevity they once did.  LaDanian Tomlinson is the highest active player in this list, but he’s almost 1,300 carries behind Smith and at 31, his days as a lead back are over.  LT has just 61 rushing attempts in 2011.  The top back on the career list in his 20s, Steven Jackson, would have to average 285 carries a season until he’s 36 to reach Emmitt.  In the last two years, only nine backs have reached 285 carries in a season.  None of them have been over 30 years of age.

It’s the oldest standing NFL record on the books, lasting 82 years, and the last unbreakable record on our list.  Hall of Famer Ernie Nevers scored six touchdowns and kicked four extra points for all 40 Chicago Cardinals points in a 40-6 victory against the Bears on November 28, 1929.  Nevers set this record precisely one month after the stock market crash in October.  Since 1960, only eleven players have even scored 30 points in a game.  Gale Sayers equalled Nevers’ mark of six touchdowns against the 49ers in 1965, but Nevers’ kicking abilities means a player would have to score seven touchdowns on his own to break the record (or theoretically, kick 14 field goals).  It’s truly one of the most impressive feats in NFL history and one that will continue to stand the test of time.