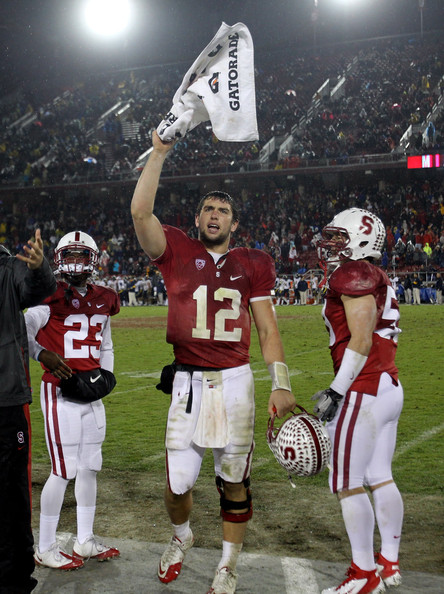 For many teams playoff seedings, berths and home field advantage. Division titles are on the line in both the NFC and AFC West and the number 1 overall seed in the AFC is on the line. Yet the most anticipated outcome is one involving the NFL’s only two-win teams.

For the St. Louis Rams and Indianapolis Colts simply put… the future is at stake. When the San Francisco 49ers visit the Edward Jones Dome on January 1 and the Colts make their way to Jacksonville much more will be at stake than it was this time last year. Week 17 of the 2010 season against the Seattle Seahawks carried the hopes of a Rams fan base for a playoff appearance and for the Colts of another 10 win playoff season.

Oh how much has changed.

Well again the season hinges on one game, albeit this time in an entirely different fashion. This Sunday, Ram fans and personnel (though they may deny it) benefit most by a Rams loss and a Colts win. Not the usual end of year scenario that draws the attention of both local and national media types. At 1:00 pm EST this Sunday the Rams and Colts will be playing their games and watching the scoreboard at the same time.

Again what makes this so unusual is the home team fans will be pulling for their squad to lose and another to win. There is not much cosmetic difference between a 2-14 and 3-13 season, but look deeper and you’ll see. A 2-14 season for the Rams coupled with a 3-13 Colts final record gives the Rams the number 1 overall pick in next April’s NFL Draft. While the opposite does the same for the Colts.

Luck for the Colts

Regardless of which team gets the top pick, it is almost a given that Stanford quarterback Andrew Luck will be the selection. There is uncertainty regarding whether Colts quarterback Peyton Manning will ever fully recover from his neck injury, but if he does, then Luck will get the Aaron Rodgers treatment for a couple years. Hard to argue against how that has worked out for the Packers.

Because of Manning’s condition, the Colts would take Luck and keep him rather than trade him. If they get the No. 2 pick, though, then it will likely keep them out of the Luck sweepstakes and allow them to take a player who can help immediately like USC offensive tackle Matt Kalil. Either would be good picks for the Colts. However, Luck offers a much brighter future.

If the Rams end up with the No. 1 pick, however, they would have a plethora of options. The first thing they could do is to draft Luck and keep him. This would be a bit of a shocking move as the drafted quarterback Sam Bradford first overall a couple years ago, but it comes down to which player the front office prefers.

This would result in the Rams trading Bradford and likely getting a nice return since he has only been in the league for two years. Bradford took a step back in his second season as a professional, but much of that had to do with terrible offensive line play, a lack of offensive weapons and subsequent injuries he suffered.

If the Rams are happy with Bradford, and all indications are that they are, then drafting Luck and immediately trading him is a possibility. The San Diego Chargers did something similar in the 2004 draft when they selected quarterback Eli Manning, but traded his rights to the New York Giants for the rights to quarterback Philip Rivers and picks that became linebacker Shawne Merriman and kicker Nate Kaeding.

A better approach, the Rams could simply trade the pick to the highest bidder. For a team to move up even a couple spots to the No. 1 pick, it takes a king’s ransom. That means the Rams could get a fantastic complement of draft picks to fill the many holes they have on their team, particularly on the offensive line and on defense.

Adam Schefter of ESPN speculates that trading the top pick could bring in three No. 1’s and two No. 2’s–a haul worthy of Herschel Walker, when in 1989 the Dallas Cowboys traded him away to the Minnesota Vikings for five players and six draft picks. That trade was a turning point in the Cowboys franchise that the Rams would welcome for their own destiny.

Ultimately, the Colts are a completely different team with Manning. While they may have been a two- or three-win team without Manning, they could just as easily win 10 games with the same supporting cast next season provided Manning is healthy. However it can’t be lost on anyone that the one dreadful season the Colts have had in their Manning years could net them the best QB prospect to come out since, well, Peyton Manning.

The same can’t be said for the Rams, as they have holes and weaknesses all over the place. Trading the No. 1 overall pick would be a huge help for St. Louis, as it would give the Rams a bounty of picks to address their many needs. Also of note, this could be enticing to a big name head coach, Jeff Fisher, to come to St. Louis.

While taking Luck first overall would be great for the Colts in the long run, no team more desperately needs that pick right now than the Rams.