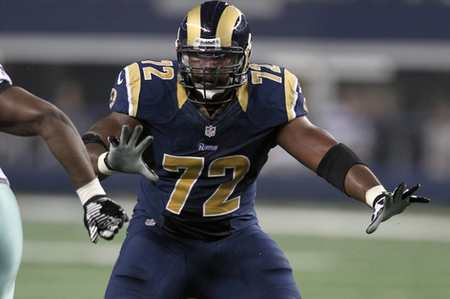 Another day, another ridiculous story out of Jets camp.

The media spin that surrounds the Jets is truly something to behold with Tebow in town, and a few weeks ago the scorn turned towards the right tackle of all people. Wayne Hunter was struggling in camp, that was no question, but it suddenly became the most right tackle spot in the league.

Only in New York.

While the sentiment around the J-E-T-S has been getting worse and worse, from one Tebow pick to a missed assignment along the line, this move may actually be moving the team in the right direction. Shocking, I know.

No one is quite clear on exactly what the Jets are going to be in terms of an offensive team. They cannot get into the end zone, so surely a wishbone set is not far away. The left side of the line is rock solid, but if the ball does get passed to Tebow, they will need to protect his blindside.

In steps Jason Smith. The generically named tackle who has struggled to live up to the hype that got him drafted second overall just a few years ago. While it was not exactly a heavyweight draft, with the top ten featuring such superstars as Tyson Jackson, Aaron Curry and Eugene Monroe, Smith has still struggled to live up to his billing.

Keep in mind he was drafted under the old CBA, which made him an enormous financial liability as well. But after renegotiating down from $10 million to $4 million for this season, and after falling out of favour in St. Louis, it was time to find a new gig for Smith. He has struggled to stay on the field consistently due to concussion issues, but if he is able to get past those and find his groove on the right side in New York, this could go down as a steal for Rex's club.

The time will come this year when Sanchez will throw a couple picks early in a home game. The calls for him will start. Just as they did last year, and the year before that.

That is of course what this is all about. While it surely doesn't look good to have your right tackle get beat time and time again, it looks a lot worse when the guys that will inevitably be taking the snaps relies on the right side for the ever important back side protection. We know how Tim is in the pocket, so help along the line is critical.

Smith was originally drafted to be a left tackle, but he became a mainstay on the right side in 2010 after making his way back from a serious concussion situation. The hope is that he will stay healthy, and considering the bargain that the Jets got him for, this move is a low-risk, high-reward deal.

Or this could just be more distraction to take away from the real problems plaguing the Jets franchise. More patchwork. Jason Smith has done nothing to show that he is anything more than a career backup, and despite his injury issues, was beat out by Barry Richardson for a job along the Rams line. Not exactly stiff competition that he lost out to. His compete level has been questioned. Reoccurring head issues is about as bad as it gets.

Austin Howard is almost guaranteed to have the starting right tackle spot locked up for now, with Smith needing to learn the playbook in short order. But just the hype of the fact that he was the SECOND OVERALL pick in 2009 will be enough to confuse Jets fans for at least a day or two. They will ignore the fact that the team cannot throw, nor run. They are also struggling with that defending thing.

It would be a long season for those faithful to the green and white. Do not be fooled by this junk for junk move, as it is nothing more than that. The Jets will probably be paying their backup right tackle $4 million this year.

Wayne Hunter is the scapegoat. Is anyone clear how that ended up happening? Not the management, coaching, quarterbacks, running backs or wideouts. But the right tackle of all people.

Eat your heart out New York.