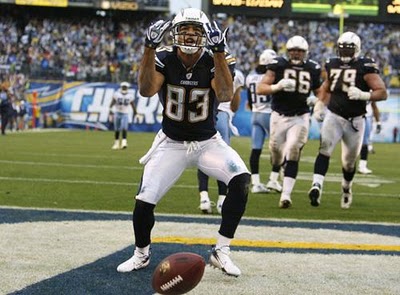 AJ Smith has let each one of them leave the San Diego Chargers with little more than a compensatory draft pick in return. Smith is frugal, and he believes that every player can be replaced. While San Diego have had a decent amount of success in recent years, they surely could have used some of the aforementioned players to help their cause.

The Chargers are now faced with the Vincent Jackson question. He has been given the run around by Smith for the past few years, with everything from trade demands and franchise tags coming his way. But this offseason Jackson is finally free. He is unrestricted and allowed to sign with whichever team he wants.

@sdutchargers: More people I talk to that are familiar w/ V. Jackson’s thinking, the more convinced I am he wants to stay in SD. Has to make $ense though.

The question must now be asked about which direction Smith will take this adventure. Will he even bother tendering an offer to his best-known wideout, now that he’ll have to pay full market rate? Or is AJ okay with seeing another star player walk out the door with nothing to show for it? The Chargers’ approach to the NFL Draft and the start of free agency hang in the balance of this decision.

In each of his past three full seasons, the 29-year old has easily surpassed the 1,000 marker. At 6-foot-5, he is a beast of a target down the sideline, and he is a matchup for any corner. But how long of a contract do you give to a player that has had some injury concerns and is nearing on 30? That is the question that Smith must ask himself.

When both are healthy, Jackson and Malcom Floyd team up to create one of the most imposing wideout duos in the league. Cover one, and the other is all but guaranteed to have a 10-catch, 150 yard day. This could partially explain why Rivers has been seen as elite (at least in fantasy circles) for the better part of the past decade. With Antonio Gates revolutionizing the tight end position, Turner, LT and Sproles turning handoffs and short passes into sizable gains, and Jackson and Floyd tearing up secondaries, Rivers has looked like an All-Pro.

But with Turner, LT and Sproles gone, and Gates hobbled, Rivers’ numbers came plummeting back to earth, perhaps introducing a shadow of doubt into Smith’s mind about how much of a difference-maker Jackson truly is.

So where do the Chargers go from here? Vincent Brown emerged in the second half of the season as a solid secondary option. He does not have the size of the aforementioned duo, but he makes solid catches. Better yet, he has yet to get on the GM’s bad side in a contract dispute.

The Chargers are picking 18th overall in the draft, and while they have all sorts of holes on the defensive side of the ball, there are a few wideouts that may tickle their fancy. Michael Floyd out of Notre Dame and Alshon Jeffery from South Carolina have the tools and size to be stars in the league. If one of them can be nabbed, the rest of the draft can be spent on the porous defense, which fell far out of top-ten range to 22nd in points allowed.

This would be an easy solution if they didn’t have serious question marks elsewhere. Marcus McNeil is expected to be waived by the Chargers, just a little over a year after he held out for his pay day. Along with the expected release of Takeo Spikes, $13 million in cap space could be freed up.

It is hard to get a read on whether AJ is cutting salary just to cut it, or if he actually intends on spending it. There are some big name defensive players that his team could badly use. Mario Williams of course, but also someone like Cliff Avril or Robert Mathis would be a much needed presence on the edge. Or maybe they go for some shutdown action on the outside with one of Brandon Carr, Brent Grimes or Carlos Rogers.

Cutting your leading tackler and starting offensive tackle does not seem so wise. McNeil’s replacement, Jared Gaither, is a free agent and Vincent Jackson is expected to seek a top-dollar deal. Rivers seems to always be a hit away from having his knee buckle and Ryan Mathews still hasn’t proven he can handle every-down duties for an entire season.

Maybe AJ Smith has a lot more to work on this off-season than even knows.

Brees. Turner. Sproles. Tomlinson. All gone for nothing.