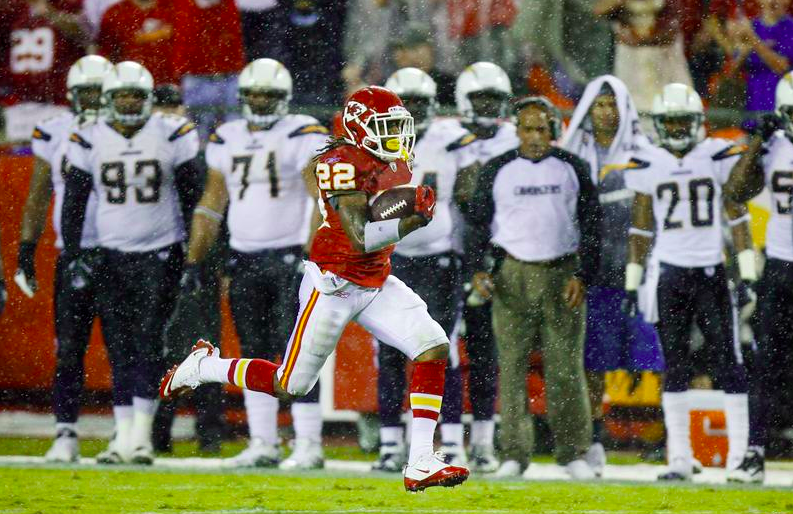 We are now moving into the post feature back era, in which entire teams are no longer built around specific backs with all-around skills, but rather a collection of specialists designed to keep opposing teams off balance at all times.

This has been coming for years, as the kill rate of feature backs is simply too high to invest extensively in them. This off season alone has seen the holdout, or at least the threat, of some of the best backs in the league. But teams are able to go out and beck cheap, young alternatives that are able to plug in and get the job done.

Matt Forte and Maurice Jones-Drew feel that they should be paid like the other top backs in the league, but their respective teams realize that replacements are a plenty, and plenty cheaper.

While the burn out rate of highly regarded backs is high in the college ranks, there are always pro teams awaiting their arrival and they need not worry about their test marks. The likes of Marc Tyler and Bryce Brown, a pair of former five-stars, made their big league debut today, well at least in a pre-season match. Both struggled to find time in college, which might actually work into towards a successful pro career.

They are not already worn down, but rather have fresh legs that can at least take on second string duties. They will be waiting in the wings if the feature back takes a knock, and they are cheaper and younger. Teams are constantly rebuilding, and it is becoming easier with the depth of talent coming through the college ranks.

We had the wildcat for a bit, and the 'Skins now claim that they have some spread option in their playbook, but the spread is what is truly taking over the league. Double tight sets which resemble something closer to four wide. Players flying in motion and getting open in the flats. Track athletes becoming ball carriers.

Dexter McCluster. Randall Cobb. Devin Hester. You know the type. Remember the name Chris Rainey this season. With Mendenhall banged up to start the season, the former Gator looks to be a factor with Big Ben and the black and yellow.

Ryan Mathews went down with a broken collarbone tonight. Adding further credence to the thought that feature backs simply cannot be trusted. The Chargers were fully committed to Mathews this year, bringing in little in the way of competition into camp for him. The Fresno St. product needed to step up though. Instead, the Chargers now have Ronnie Brown atop their depth chart. Cedric Benson or Ryan Grant could get a phone call in the next day or two, but the faith placed in the feature back while failing to pick up a younger, cheaper option is an oversight by AJ Smith.

The league is getting younger. As we move into the second year of the new agreements, teams will be looking to dump former high picks that were bloated by the old rookie scale. This will open the door for even more younger and cheaper options that are not able to become the highest paid players on the team like we had just a few years ago.

Scouting departments are scouring Div II teams, looking for backs that do one thing great. Pro teams seem to have no issue taking players high in the draft that did not have full college careers. It makes sense really. One or more less years of college, whether transfer or eligibility, it simply means one less year of wear and tear on their bodies. With the shelf life of backs diminishing, if you can get the most out of a back with fresh legs for 2-3 years in their prime years, while avoiding paying big cash, you are laughing.

Younger and faster. Everyone is disposable. The leagues leading rusher is holding out for more money from the Jags. New ownership is aware of this reality. They can tank a season and draft their new franchise back to go with Gabbert and Blackmon. New franchise right there. Who is to say that MJD even has much left, considering his size, running style and age.

The game is changing. Catch up.